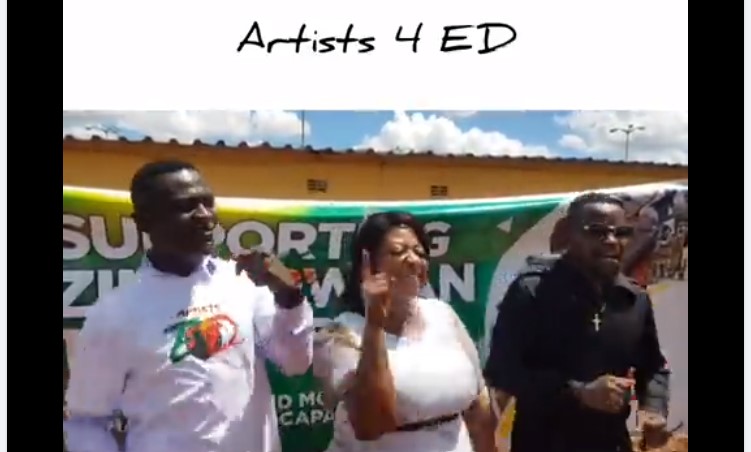 A group of local artistes calling themselves Artists for ED has rallied the nation to vote for President Emmerson Mnangagwa ahead of national elections scheduled for this year.

Allan Professor Chimbetu is among the artistes.

Follow the link by Bustop TV to watch the video.

This comes as Zimdancehall chanter, Winky D, born Wallace Chirumiko, has been criticised by some individuals and groupings sympathetic to the government for allegedly singing political songs.

They accuse the Gaffa, as Winky D is popularly known, of dabbling in politics and attacking the government, with DJ Fantan going as far as claiming that the musician was paid to criticise the government.

Holy Ten, who featured on “Ibotso”, one of the tracks on Winky D’s latest album, Eureka, has since said he regretted collaborating with Winky D, saying the song had been politicised.

However, government critics including Norton legislator, Temba Mliswa (Independent) said there is nothing wrong with Winky D singing about maladministration, leadership failure and other social ills which are plaguing the country.

Citizens Coalition for Change (CCC) spokesperson, Fadzayi Mahere has criticised Youth, Sports, and Recreation minister, Kirsty Coventry for failing or neglecting to speak up for artistes whom she says have a constitutional right to express themselves.

3 comments on “WATCH: Artistes For ED Endorse Mnangagwa Ahead Of 2023 Elections”