The Zimbabwe Republic Police (ZRP) has issued what appears to be two contradicting statements on the disappearance of MDC legislator Joana Mabombe and her two colleagues Cecilia Chinembiri, and Netsai Marova.

I can confirm that the police arrested the three in Harare today in connection with an illegal demonstration, which occurred in Warren Park earlier in the day. They are in our custody and we are still making further investigations into the issue.

We want to warn members of the public, or any groups who are engaging in acts which affect efforts by the Government to fight Covid-19 that they will be arrested without fear or favour. They will only have themselves to blame.

Later in the day, however, the police made an about-turn claiming on Twitter that Mamombe and her colleagues were not detained and are not in police custody. The statement said claims to the contrary were false (saved copy):

The ZRP wishes to make it clear that the MDC Alliance members who include Johanna Mamombe, Obey Sithole, Ostallous Siziba, Stanley Manyenga and Justin Chidziva who were involved in an illegal flash demonstration on 13/5/20 in Warren Park, Harare are not in police custody.

Their lawyer has been in contact with Officer Commanding Police, Harare Province and was told to bring his clients for an interview with regards to the above cited matter. This is the official position.

Police, therefore dismisses all social media insinuations that the MDC members were either detained or are in police custody. 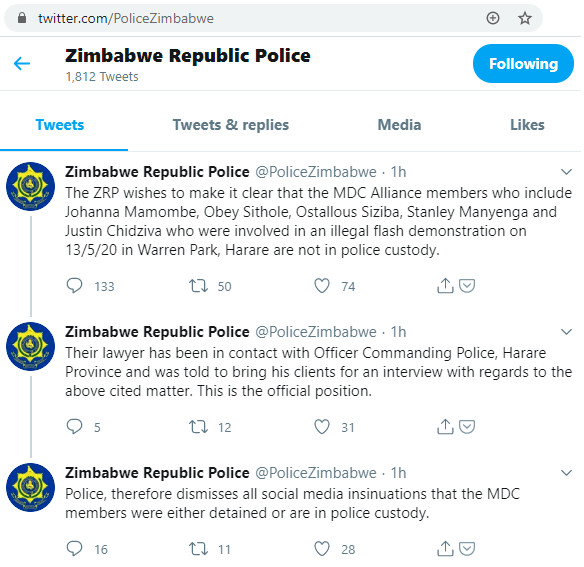 Commenting on the apparent contradiction, law academic Dr. Alex Magaisa said that there might actually be no contradiction at all:

There appears to be a contradiction but on closer examination, it can be reconciled.

The MDC has raised alarm that their members were abducted and has demanded to the ZRP to ensure they are found.

The European Union (EU) and the United Kingdom (UK) have urged President Emmerson Mnangagwa’s administration to ensure that legislator Joana Mamombe and the two female MDC Alliance officials are found.