16 September 2019
The Zimbabwe Heads of Christian Denominations (ZHOCD) writes this pastoral message to the President as head of Government and to all the Citizens of Zimbabwe seeking a lasting solution to the deteriorating human security situation in the context of a deepening economic crisis.

1. Church leaders are learning with deep concern the deteriorating human security situation especially as demonstrated by at least 20 reports of abductions. This situation is deeply worrying because none of the reported cases of abduction and torture have been successfully investigated and prosecuted.

2. The situation is further disturbing because there is government communication suggesting that there is a possibility of a third force. Apart from it being too coincidental that this third hand is only targeting civil society activists and other dissenting voices, it is worrying that after so many reported cases, not a single person has been arrested. This has put the security of citizens at the highest level of vulnerability.

3. The church leaders are also concerned to hear of the fragile relationships within the security sector alleged to have only worsened in the course of the November 2017 transition. If this is the case, the church leaders are worried that politicization of the security sector in the context of deep inter and intra party fragmentation puts the whole nation at highest levels of security risk.

4. The church leaders are aware that the population is getting restive due to the pain of worsening economic conditions demonstrated by loss in buying power and the rapid increase of prices.

5. The church leaders would like to highlight the lack of confidence in the current national economic reform trajectory and the absence of a meaningful consultative process to ameliorate it. Unfortunately, the growing pessimism is not only shared by international economists but also by respected local economists.

6. The church leaders are concerned that low public confidence in the context of fragile security sector is a recipe for national crisis.

Basis of the Church’s response

7. It is foundational Christian belief that all human beings are created in the image of God and should have their dignity respected at all times. The same God who created them in His own image is the same God who also commanded that, “You shall not kill”. This is the same God who calls on all to repent of their evil ways out and be reconciled to God and to one another.

8. The church also believes that order in society is maintained through the respect of laws of the land. In this light, the church leaders would like to reiterate that all forms of torture, abductions and unlawful confinement are against the spirit and letter of Section 53 of the Constitution which states that: ‘Every citizen is entitled to freedom from torture or cruel inhuman or degrading treatment or punishment and further explained that no person may be subjected to physical or psychological torture or to cruel inhuman degrading treatment or punishment.’

Call by the church leaders In light of the above,

9. The church leaders call upon President Mnangagwa to publicly condemn the abductions and torture of civilians as well as appointing an independent investigation into these abductions

10. The church leaders call upon business, labour, civil society groups, political parties and all key stakeholders to commit to a broad-based and comprehensive national dialogue towards:

i. A social contract and consensus among all Zimbabweans,

ii. A shared agenda of the necessary national reforms, and

iii. A shared national economic vision based on shared burdens and commitments.

11. The church believes it is in the interest of President Mnangagwa’s legacy to provide leadership towards building national consensus towards national unity, peace, justice and prosperity for all Zimbabweans.

Isaiah 1:17 Learn to do right; seek justice. Defend the oppressed Take up the cause of the fatherless; plead the case of the widow 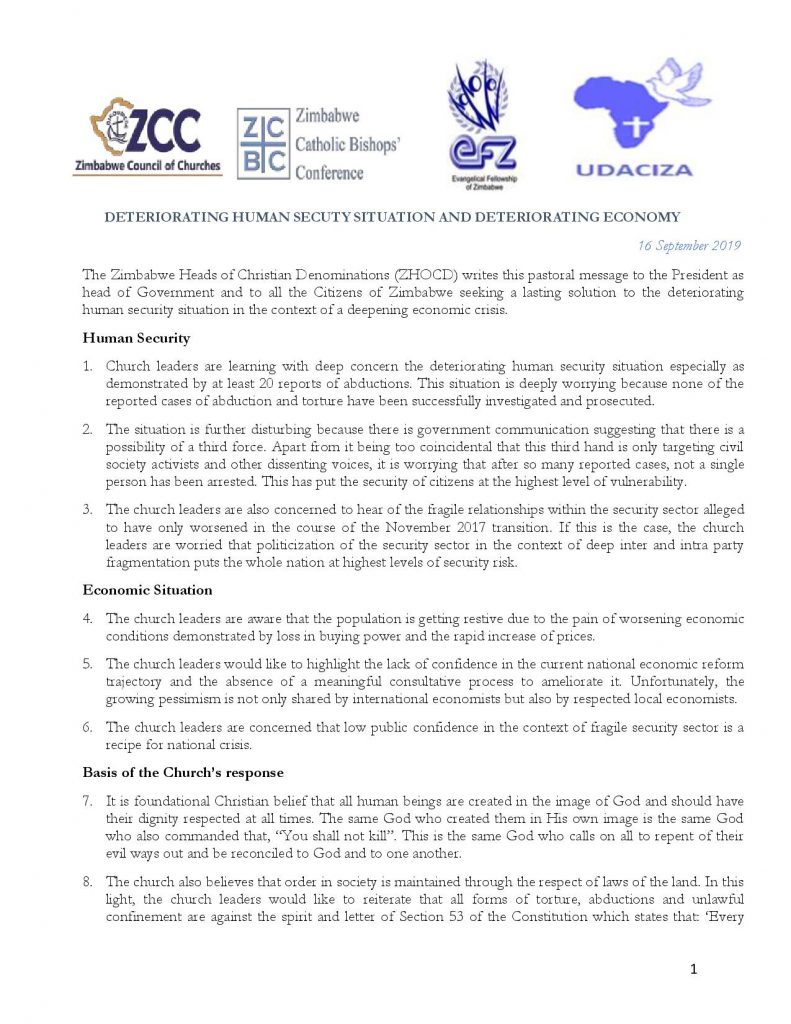 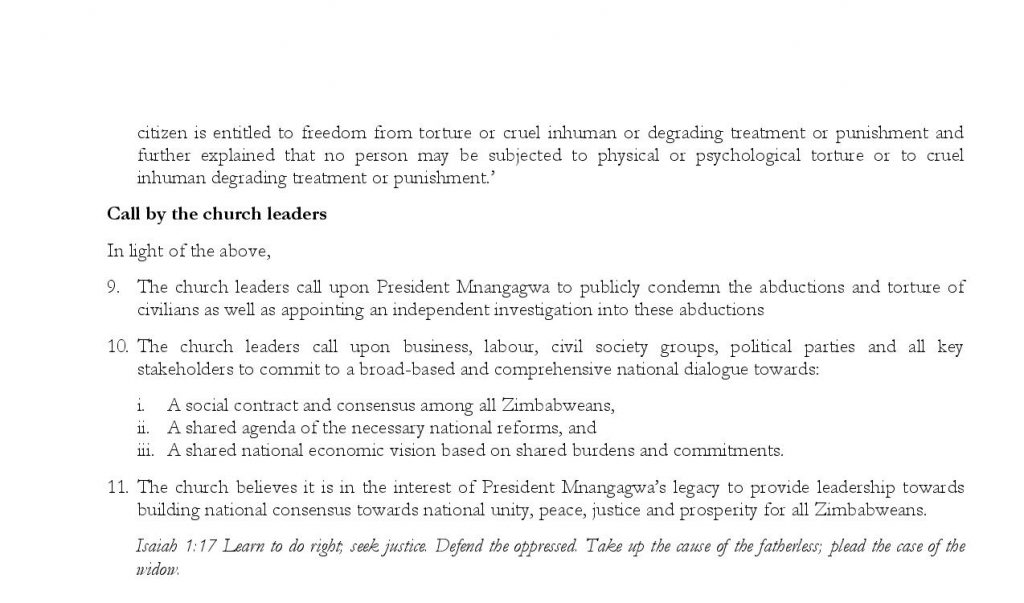 The Zimbabwe Council of Churches Secretary General is Kenneth Mtata. In January 2019, following the nationwide protests and a violent crackdown by the state security, Mtata refused is appointment to a Presidential Advisory Committee.