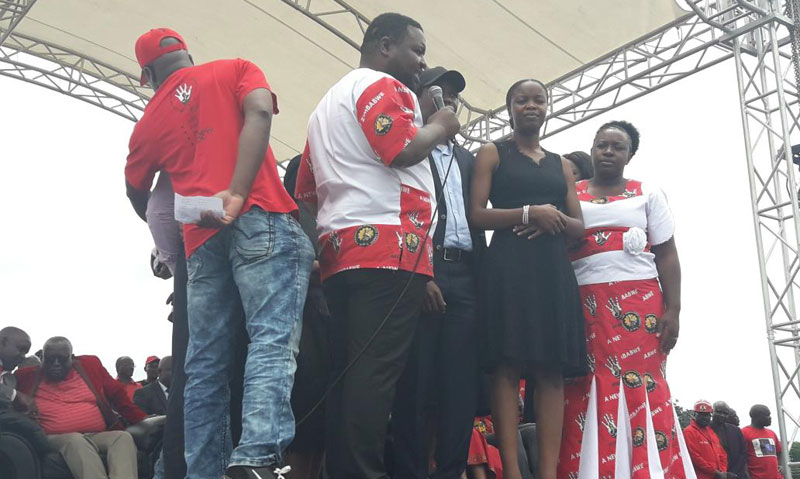 Tension seemed high in the family of the late former founding leader of the opposition MDC-T party, Morgan Tsvangirai, when his widow Elizabeth Macheka Tsvangirai, remained seated when the family was being introduced. Elizabeth did not go on the stage when the rest of the Tsvangirai family stood up at Freedom Square, which is also called Robert Mugabe square, where Tsvangirai’s life was being celebrated. The body of the veteran opposition leader was brought to the venue so that MDC-T Supporters could say goodbye to their revered leader.

The former prime minister’s oldest son, Edwin, introduced the Tsvangirai family except for his stepmother. He went on to urge the MDC-T party to respect the family and to stop showing disunity at his father’s funeral.

This follows reports that the Tsvangirai family has disowned Elizabeth and is planning to grab Morgan Tsvangirai’s entire estate. Tsvangirai’s mother was present at the celebrations, despite boycotting the memorial service held on Sunday. Gogo Lydia Tsvangirai, made waves on Saturday when she was eavesdropped by ZBC News, threatening to commit suicide if Elizabeth and Nelson Chamisa showed their faces.

Edwin’s brother, Richard added that the MDC-T’s new leader should take care to protect the legacy of his father. Edwin said the legacy he was referring to was that of free and fair elections as well as a non-violent campaign.

Tsvangirai is expected to be buried tomorrow in his rural home of Buhera.