ZANU PF has responded to MDC Alliance leader Nelson Chamisa’s State of The Nation Address and called it a hollow address before encouraging all political parties to come for dialogue. The ruling party also denied reports that they are using COVID-19 to delay elections and said they have the mechanism to thwart what they called Chamisa’s mechanism to destabilise the country but they will leave that to law enforcement authorities. Below is ZANU PF’s response.

ZANU PF RESPONDS TO NELSON CHAMISA’S UTTERANCES
The Revolutionary Party ZANU PF has noted with contempt, the MDC-A veiled threats to unseat a constitutionally elected Government following pronouncements by Mr Nelson Chamisa during his hollow address of 09 March 2021, dubbed, Agenda 2021. In his long monologue, Mr Chamisa did not only fail to demonstrate leadership but failed to instil hope in his fractured party, instead, rumbling about seeking to establish pockets of resistance across the country similar to the ill-fated 31 July 2020 attempted violent demonstrations, whose sole attempt was to destabilise the country.

While, ZANU PF has the capacity to thwart such machinations, as a law-abiding organisation, we rest the matter with the law enforcement agencies. The people of Zimbabwe have had enough of this childish rambling from a party clearly running short of oxygen. ZANU PF and its leadership have no agenda whatsoever to decimate any opposition political party. We cherish democracy as born out of a protracted Liberation Struggle which freed our people from the shackles of colonialism and settler regime, winning freedom and independence in 1980. Of course, there was no MDC then, not even in Zimbabwe’s womb.

ZANU PF, therefore, urges political players to embrace dialogue and join others under POLAD in the spirit of frank engagements instead of focusing on divisive and polarising antics. For the record, ZANU PF is proud of how our Government has rallied the nation in fighting Covid-19 and significant strides have been made including among others, acquiring the vaccine which has seen our frontline warriors being inoculated. It is therefore not only preposterous but irresponsible, to say the least, for Mr Chamisa and his lot to suggest or opine that our government is using Covid-19 to delay by-elections. The President, Cde ED Mnangagwa has reiterated severally, that his objective in all these measures put in place is to save our people’s lives because once lost, they can never be recovered. It is therefore mind-boggling that given this imperative, Mr Chamisa’s faction is obsessed with by-elections which of course, by all standards have no effect on ZANU PF’s two thirds parliamentary majority.

Be that as it may, ZANU PF points it clearly, that the Party does not interfere with parliamentary recalls involving non-members and does not interfere with the running of by-elections, which is a prerogative of the Zimbabwe Electoral Commission (ZEC). The Party is more than ready for the by-elections, except that we respect the measures put in place to save lives during these deadly times. ZANU PF is quite alive, however, that Mr Chamisa is under pressure to seek relevance in the face of mass exodus of key members from his party who have defected to the Revolutionary Party. This is not our problem, but his, and we shall continue to welcome all those who have elected to return back to ZANU PF, the People’s Party. That should not be equated to forming a one-party state.

Zimbabwe remains a multiparty democracy and ZANU PF cherishes that. However, we don’t offer political consultancy to collapsing parties. As such, those tired of civil political engagement must stop venting out their frustration through experimenting with the country’s hard-won Freedom, Peace and Unity. ZANU PF urges its membership to remain vigilant in the face of these renewed sponsored regime change machinations and implore the newly constituted DCCs to continue to preach the gospel of unity, peace and development in line with the New Dispensation’s mantra and President ED Mnangagwa’s Vision 2030.

We remain unshaken and unwavering in our quest to deliver our 2018 electoral promises, as illustrated in our 2018 People’s Manifesto which remains the chapters and verses guiding our programmes. President, Cde E.D Mnangagwa has declared 202 I a year °faction and productivity. We call upon all our people to continue to focus on production, buoyed by the success story of the Pfumvudza/ Intwasa Farming Programme to ensure that our nation continues to achieve food security. The ruling Party and government are determined to achieve an Upper-Middle Income Economy by 2030. The National Development Strategy 1 (NDS 1) recently launched by His Excellency the President, Cde E.D Mnangagwa has been embraced nationally and internationally. Our focus is on productivity, productivity and productivity across all sectors of the economy. Finally, let it be known that ZANU PF has no time for primitive politics with tribal undertones as we recently observed the people of Manicaland, Chipinge in particular being subjected to ridicule at the hands of opposition officials. 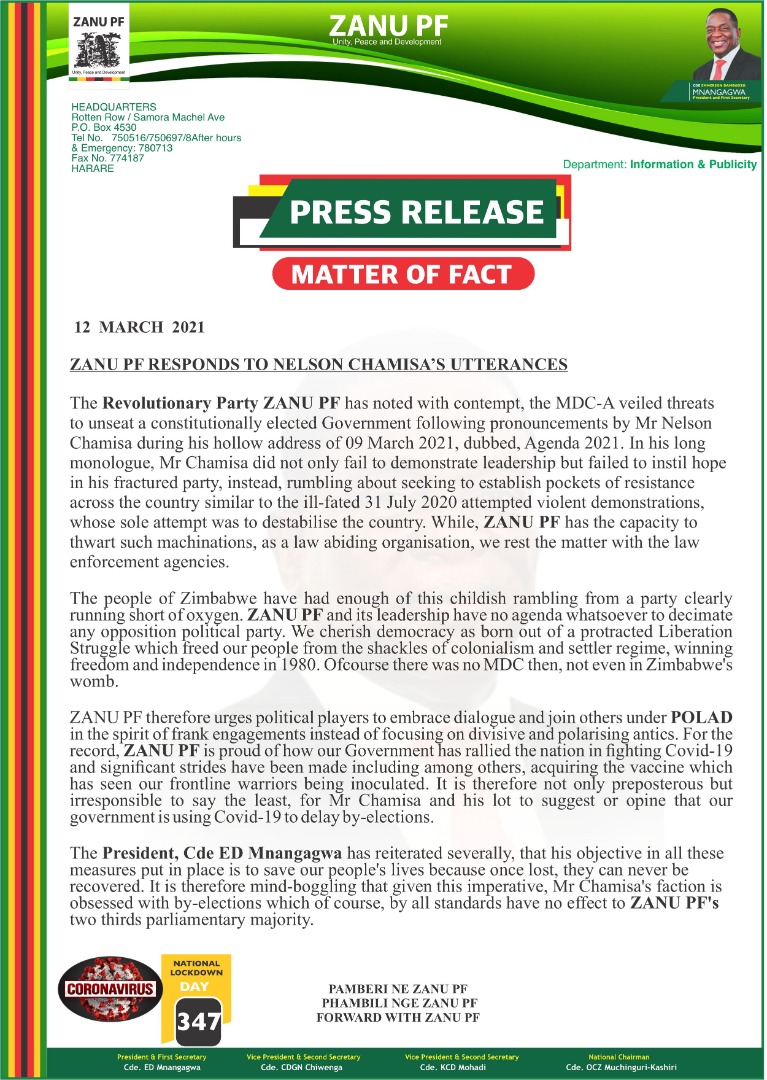 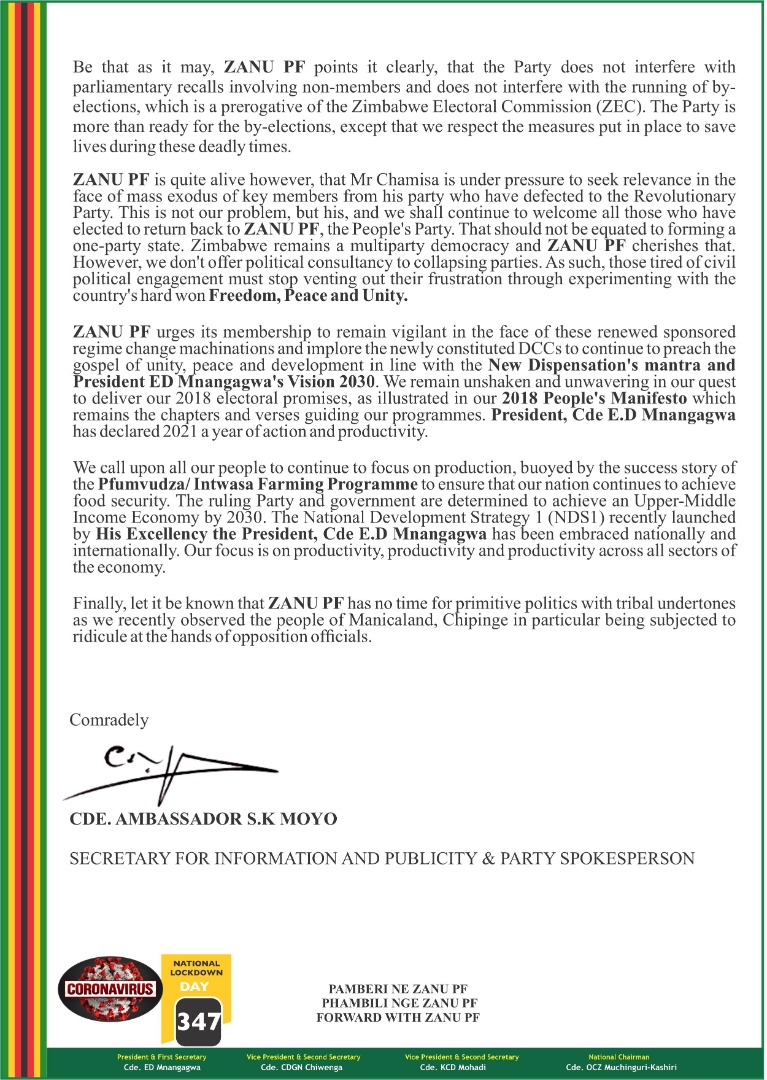 One Comment on “FULL TEXT: ZANU-PF Responds With “We Can Thwart You” To Chamisa’s “Hollow” SONA”

FULL TEXT: ZANU-PF Responds With “We Can Thwart You” To Chamisa’s “Hollow” SONA