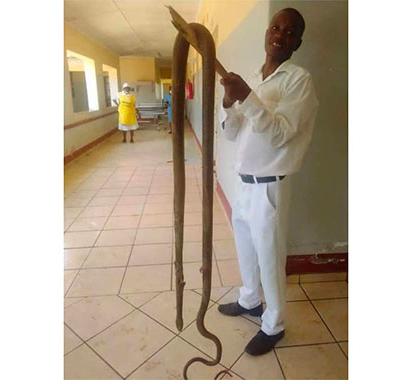 A Humongous snake reportedly caused a commotion at a hospital this week after it got entry into one of the hospitals’ wards and put up for the night under one of the patients’ beds, The Herald reports.

The snake believed to be a cobra terrified both patients and hospital staff who ran for cover when they saw the huge reptile. It was reportedly discovered by one of the nurses during a routine checkup curled under the patient’s bed.

The incident was confirmed by Mvuma District Development Coordinator Mr. Bafi Hlabati. A nurse who spoke to the publication said the snake terrified everyone:

The incident left both nurses and patients scurrying for cover but it was then killed by some nurses using logs.

People and spectators reportedly suspect the snake might have been seeking shelter from the incessant rains which have flooded the areas of late. There have been no reports of the snake attacking anyone and no foul play or superstitious beliefs have been entertained or reported about the incident so far.

Last month a crocodile crawled into the male ward of Chiredzi hospital after climbing out of the town’s storm drain an incident that reportedly terrified the hospital staff and patients alike.