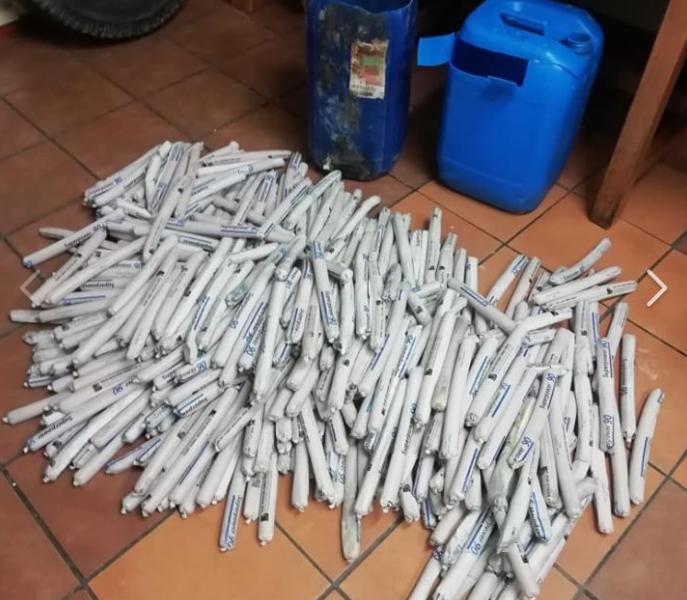 A man was arrested on Thursday for trying to smuggle explosives contained in four-gallon plastic containers being transported on a trailer into SA from Zimbabwe. Image: Supplied by SAPS

A Zimbabwean born South African based hearse driver was this week jailed for 15  years for smuggling explosives with over R 400 000 into South Africa from Zimbabwe, The Herald reports.

Wisper Ndiwen was arrested in July and he had been in remand since then after he was found with explosives in the hearse van he was driving from Zimbabwe where he had delivered a body.

According to Captain Maluleke of The Hawks in South Africa:

On July 26, 2020, at Beitbridge Border Post, the police were busy with their routine stop and search duties when they stopped a hearse that was coming from Zimbabwe and searched it.

Instead of finding a coffin in the hearse, they discovered explosives with an estimated value of over R420 000 and subsequently arrested Ndiweni who was the driver of the vehicle

This is a second jail sentence imposed on explosives’ smugglers in the month of December alone. Patson Banda (25) and Life Mbazi (33) were recently sentenced to 15 years’ direct imprisonment by the Musina Magistrate’s Court for smuggling explosives.

According to the publication, over 30 people have been arrested in the Beitbridge Musina area for smuggling explosives worth millions of dollars between the 2 countries Zimbabwe and South Africa.