Three Twimbos yesterday remember the promises the govt made when the introduced the Bond notes in 2016. One particular promise was by then-governor John Mangudya who said if the bond note failed he would resign. 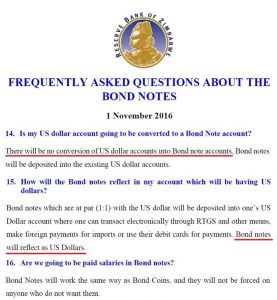 A brief reminder of the promises made by ZANUPF and its RBZ when it introduced bond notes. Every single one of these promises has been broken. This is a party which cannot be trusted in anything it says or does. pic.twitter.com/OYQwg6Haj4

Back in May 2016, I predicted that bond notes were a scam & were the precursor to the return of the Zim Dollar. I said in clear terms that our forex accounts would be raided. Mangudya went on a lying tour that USD accounts wouldn’t be turned into bond note accounts.

And Mangudya did not resign he is still there taking plle’s US$ https://t.co/MiQ8kWDh05

This comes at a time where the bond has lost value against the greenback with rumours of a new currency to be introduced next month circulating.