A few weeks ago Auditor-General Mildred Chiri’s report on Command Agriculture set tounges waging as it emerged that, a company called Solution Motors was paid $1 Million by the government to deliver some command agriculture vehicles but were in no show since December 2017. Solution Motors was reportedly claiming that it was authorised by Nissan South Africa to be their distribution agent in Zimbabwe.

Nissan South Africa has issued out a statement distancing itself and debunking the notion that it was in any way linked to Solution Motors Zimbabwe. 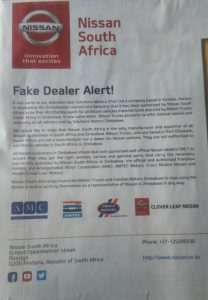