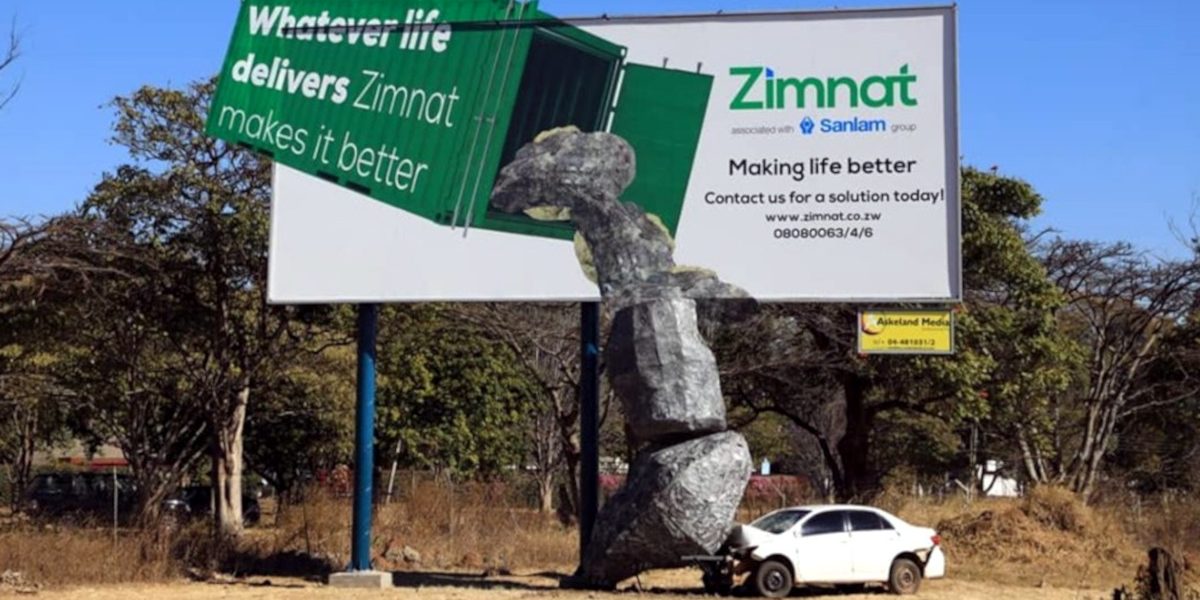 A new billboard advert along Borrowdale Road in Harare which shows a car accident has caused a stir due to its realistic representation of traffic accidents. The advert is by insurance company Zimnat. It shows a real car that appears to have collided with boulders falling from a container.

Said some motorists on social media

So far the best advert I have seen in Zim.Great stuff

This advert at Borrowdale Race Course is misleadin, imagine today i stopped by to check whether there are pple inside n wondered hw the car crushed wth the directiom it wasnt clicking at all. After a few minutes a security guard came and laughed at me telling me its an advert😂😂😂😂. I give up this is creativity lol..

All these bill boards are dangerously distracting. Great advert though!

It’s really serving its purpose, catching our attention. Had to take a double look. Now its got us talking. Well done Zimnat

I saw this car on the first day before they added the rocks.. It was under the billboard and I slowed down looked around and thought funny it doesn’t look like there’s glass etc around and where is the engine 😂😂 then I still said if it was stolen what a weird place to abandon it the next day I had someone in the car and was telling them what I saw and only when we got there and saw the full advertisement did it make sense 🙄🙄🙄🙄

Each time we drive past, my youngest exclaims “mum another car has hit into those rocks” and I have to explain AGAIN that it is just an advert

I see the wheels are still on the vehicle in this pic….. They’re gone now.

Excellent! One way to slow traffic down on Borrowdale Road.

At least it got me to slow down 😂😂. Brilliant @Zimnat.

Are we all up studying, ironing, cooking, washing, watering the garden before school run?

I’m not so sure about the brilliance of this advert… it’s clearly an innovative and eye catching attempt, but I surely wouldn’t give it any awards… It’s rational is quite flawed. The container is highlighted in Zimnat green, thus implying that the brand actually caused the chaos, rather than what the copy implies – that the brand makes situations better. The advert doesn’t tell me how Zimnat makes this situation better. In a district oozing with really creative billboards, like Joburg, this would have been the laughing stock of the town. However, we’re thrust with so many static and boring adverts in Zimbabwe, so a little creative effort does get you the kudos, regardless of it making no sense at all. Oh well!

This is the second series of “real accidents” billboard adverts by the insurance company. In 2018, the company’s billboards included a real car apparently embedded in a wall in the city centre, depicting a car that had rammed into the wall.

Zimnat is an issurance company in Zimbabwe. It was founded in 1946. The Zimnat group has 4 business units: General Insurance, Life Assurance, Asset Management and Microfinance. Read More About Zimnat