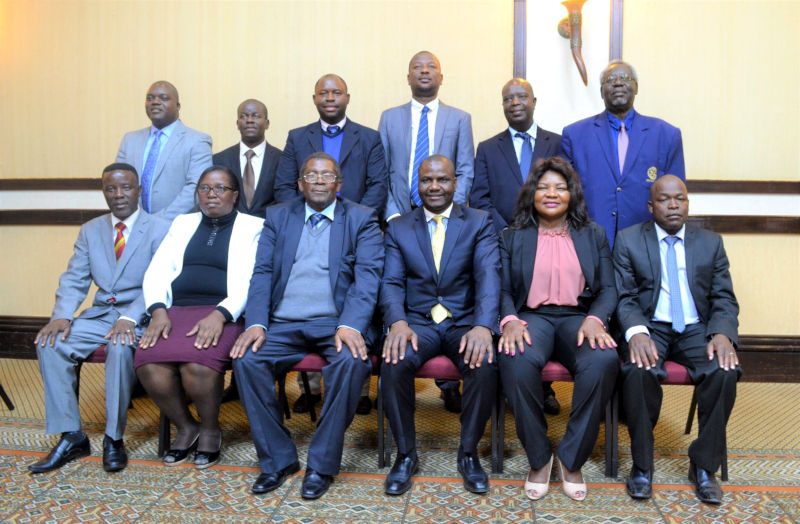 The Zimbabwe Cricket board elected at the nullified Victoria Falls AGM

The Sports and Recreation Commission (SRC) and Zimbabwe Cricket are in a fight following a recent Annual General Meeting where Zimbabwe Cricket elected a new board. The AGM and election were held on 15 June despite the government, through the SRC, calling it off.

Defending the holding of the AGM, acting managing director Givemore Makoni wrote to the SRC:

“ZC fulfilled its mandate and obligation to the ICC and remained compliant with the ICC constitution … our letter and subsequent actions by way of an SRC board resolution to suspend the ZC elective AGM could be viewed by the ICC as government interference which would be in violation of Article 2.4 0 of the ICC constitution …”

On Friday, 21 June, the government issued a press statement announcing the suspension of the newly-elected Zimbabwe Cricket board and Makoni over its failure to suspend the AGM.

The statement essentially said that Zimbabwe Cricket applied to and was registered as a sports association by the SRC and that the SRC, therefore, has authority over how the organisation is run. The SRC also used then announced the appointment of an interim board.

Summarized, its statutory mandate constitutes the SRC as being the authority responsible for the registration and regulation of ALL sport and recreation in Zimbabwe.

The SRC exercises its authority primarily through ensuring for the adherence by registered national associations and clubs of their respective constitutions and regulations, particularly in relation the election of office bearers and financial management.

From a national perspective, it is the SRC that authorizes the award and wearing of all national colours, the undertaking of any tours, within and without, Zimbabwe, in respect of the disciplines falling under its jurisdiction.

The omission in the past, for whatever reason, to ensure for rigorous compliance by national sports associations, and clubs, in regard to their respective constitutions has manifest itself in depressingly visible examples today.

Many sporting codes are riddled with intrigue and controversy all stemming from constitutional and governance deficiencies, including, to say the least, poor financial management.

It has been the disturbing trend that, as a result of these deficiencies, recourse has been made, often at the eleventh hour, to Government by the affected associations seeking funding for activities many months within the prior knowledge of those that should be responsible for the adequate planning of these events.

The great irony arising from this state of affairs is that whereas it is perfectly acceptable to seek recourse to public funds from Government to subsidize what is clearly the result of plain incompetence on the part of these national sports associations, the reciprocal requirement by the SRC for greater compliance and transparency in the activities of the affected association, where public funds have been used, is touted as an example of unwanted Government interference.

Zimbabwe Cricket applied for registration as a national sports association responsible for the administration of the game of cricket in Zimbabwe. The application was made to the SRC, which upon due consideration thereof, registered Zimbabwe Cricket.

In doing so, Zimbabwe Cricket placed itself under the jurisdiction and authority of the SRC in relation to its adherence to, inter alia, its own constitution, governance and financial structures, its administration of the game of cricket including the awarding of national colours and undertaking of inward and outward tours.

…It is matter of documented public knowledge that ZC has been the subject matter of several controversies over the years. There have been allegations of outright disregard for its own constitution, neglect of the development of the game and related infrastructure throughout the country.

The SRC hereby suspends, with immediate effect, the entire board of ZC ostensibly elected as such on June 14, 2019 in Victoria Falls … suspends, with immediate effect, the acting MD… the SRC in terms of Section 30 (2) of the SRC Act hereby appoints an interim committee to administer the affairs of ZC with the assistance of the ICC, which is, additionally, hereby requested.

The names interim board has: