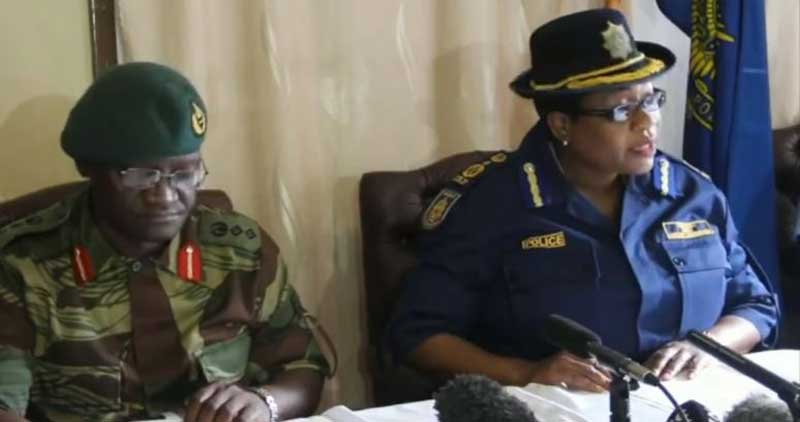 The Zimbabwe Republic Police (ZRP) and the Zimbabwe Defence Forces (ZDF) have issued a joint press statement on reports of soldiers beating up people in high density suburbs.

Police say that they have received reports on only 3 incidents. Two of the cases involve soldiers’ houses being stoned by unknown assailants.

The Zimbabwe Defence Forces and Zimbabwe Republic Police wish to inform the nation that we have noted with concern media messages/ footage detailing alleged assaults by soldiers. We wish therefore to categorically state that we condemn all forms of violence in whatever form and assure the nation that any such cases which have been brought to the attention of the police will be investigated without fear or favour. Investigations on reported cases are underway as we continue to monitor the situation.

We confirm that only three cases have been reported to the police one at Machipisa, Chitungwiza and Mabvuku police stations respectively. The first case was perpetrated by unknown assailants who were driving a white pickup and wearing civilian attire who stormed a house and beat up the occupants.

We urge members of the public who have witnessed such incidents, fallen victim or have knowledge of the assaults to report to the police on the following hot line numbers 0242 748836, 703631 or any nearest police station for swift action to be taken by authorities.

We have set up standby teams that are ready to swiftly respond to such incidents. Where possible, without endangering yourself please try, to capture images of such assailants. Some of these individuals might be criminals masquerading as soldiers. We assure the nation that we are ready to protect the through efficient discharge of our duties.

One Comment on “Full Text: Soldiers Had Their Houses Stoned: ZRP, ZDF Speak On Soldiers Beating People In Ghettos”