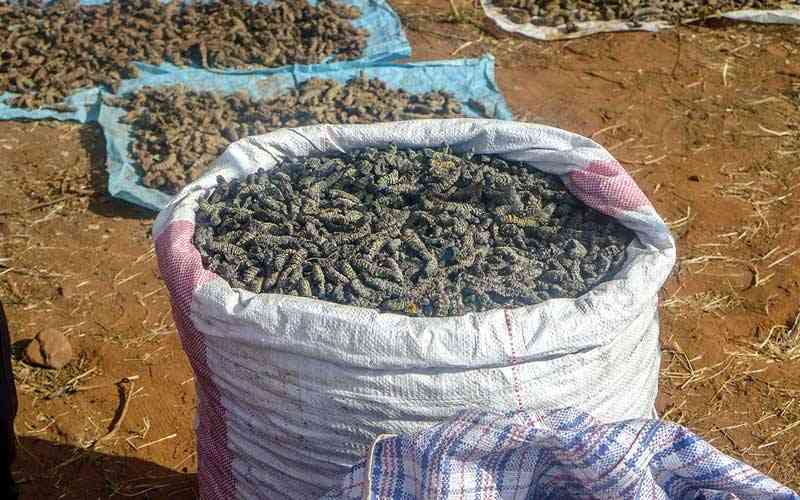 A traditional leader in Matabeleland South Province, says outsiders should not harvest mopane worms (amacimbi / madora) in the region as they employ poor methods of harvesting.

This comes after the province has been inundated by people from various parts of the country who have been harvesting the worms since the onset of the rainy season.

Amacimbi have been one of the economic enablers for people in our districts.

Now they (outsiders) are chopping down trees, which are the major source of mopane worms breeding.

So one wonders why the Environmental Management Agency (EMA) is not protecting our people.

This is not the way to live; you know these people come here and do their business of collecting mopane worms and some do not even have respect because they cut down the trees.

Another thing is they do not know the process of collecting because they are not supposed to take them when they are still on the tree.

Instead, they should wait until they are now moving off from the tree on their own.

Mathema said it is perplexing that people travel from faraway places to harvest Mopane worms in Matabeleland yet people from the region do not go to other regions to exploit natural resources found there. He said:

The locals know how to collect the worms and understand the whole process to harvest amacimbi.

My question is: Have they ever seen us going to their provinces to collect any of the things that their areas are well-known for?

These people do not respect us and our culture, which is not fair because we no longer live peacefully.

They should not come here because they are now ripping us off our environmental rights.

If they want mopane worms (amacimbi) they should get them from wherever they come from not here.

The traditional leader said their efforts to engage the Environmental Management Agency (EMA) on the issue have not been successful.

Another villager, Relebile Nare said they were losing patience with the “foreigners” that had taken over their area.

Matabeleland South EMA public relations officer Sithembokuhle Moyo told Southern Eye they were aware of the issue but had not been empowered to intervene. | Southern Eye