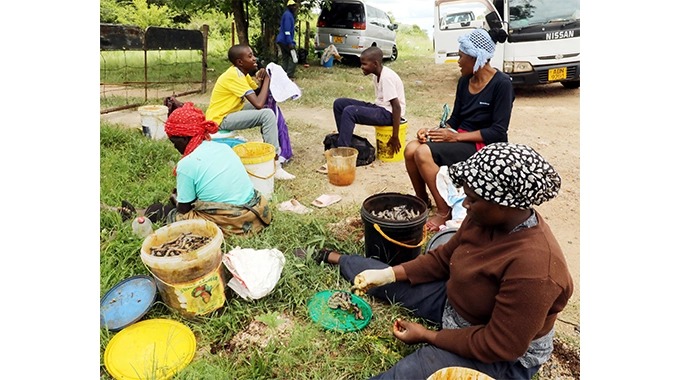 Mopane worm harvesters have inundated parts of rural Matabeleland following the above-normal rains received in many parts of the country which have resulted in the availability of plenty of the protein-rich worms.

One such area that has been invaded by mopane warm (amacimbi / madora) harvesters is the bushy area along the Bulawayo-Solusi Road.

Zimbabwe Parks and Wildlife Management Authority (Zimparks) rangers are, however, stopping traffic along the stretch of road to ensure that no one leaves the area with more than two buckets filled with the mopane worms.

A group of harvesters told the Chronicle that the Zimparks rangers are there to regulate the harvesting of the worms.

Emelia Ndlovu said she is from the Pumula South suburb in Bulawayo and they drove all the way to get the worms.

Ndlovu, who said every year she visits the area once the rains come, explained that mopane worm harvesting is a long process that needs to be done carefully. She said:

Before choosing the area where one will harvest, you need to carefully scan it and see whether there are enough amacimbi in the area and if so, if they’re big enough. After doing that comes the harvesting part.

You pick a handful if they’re already scattered on the ground and if not, you need to bring down the tree branches or better yet cut them down so that you can reach the worms.

She said after picking them and filling one’s container, you clean each worm one by one. Said Ndlovu:

This is the painful part because amacimbi are not smooth and cleaning them often hurts. Once cleaned, we carry them home where we boil and dry them.

Most people prefer carrying them after they have been cleaned because if they’re not, they will be very heavy and they take up a lot of space.

A man who only identified himself as Nkomo said he and his group were from Kadoma and travelled overnight to harvest the worms.

A local harvester, Hilda Dube said amacimbi are no longer found near the road as a lot of people have rushed to harvest them. She said:

I sell amacimbi to cross-border traders at R700 per bucket and keep some for home consumption.

The only challenge that we come across here is the danger of being bitten by snakes. Snakes eat amacimbi so once they are around, you know a snake is nearby.

Just this morning as we were harvesting, we saw a big snake and we immediately vacated the area and went to a different spot.

Reports suggest that in a good season, over 500 tonnes of mopane worms are collected throughout Matabeleland South Province with an estimated value of up to US$1 000 000. | Chronicle