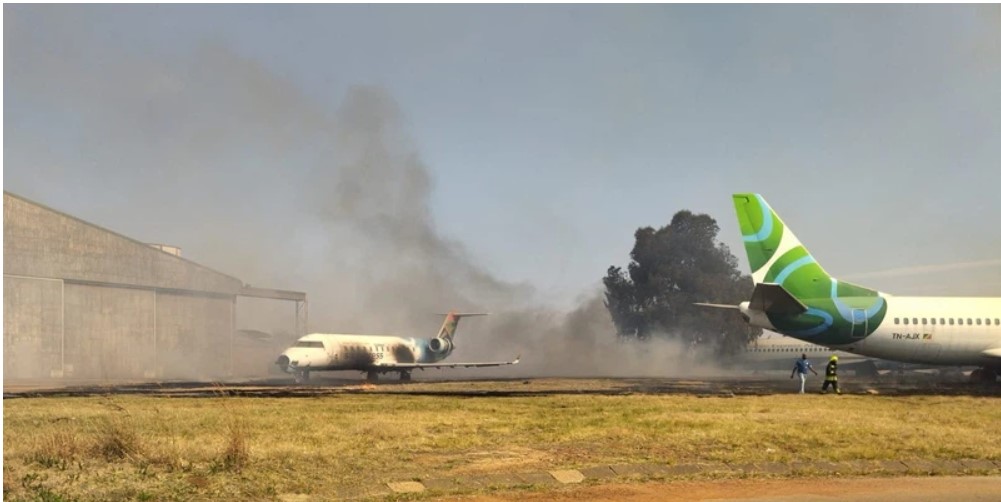 Two non-operational aircraft were affected by the veld fire at Bonaero Park near OR Tambo International Airport on Monday afternoon.

According to spokesperson Samukelo Khambule, the planes were parked, and there had been no deaths reported.

The airport temporarily closed one of its two runways, 2L/O3R, after the fire spread from the neighbouring community, according to News24.

Khambule said the runway was reopened after emergency services had extinguished the blaze. He said:

Our fire and rescue team has managed to contain and successfully extinguish the fire. They will continue to monitor the situation closely throughout the night. Two aircraft parked at Denel were affected by the fire, and no loss of life was reported.

A video seen by News24 shows two aircraft, one of them an EC Air plane, on fire.

Flights were not disrupted.

The fire which took much of Monday left a blanket of smog over much of Boksburg.

Allegations in the media suggested the fire was caused by arson as a consequence of a grass-cutting tender dispute. Airport management firm Airports Company South Africa (Acsa) has denied it told airlines the fire was a controlled burn which got out of control, according to the Citizen.