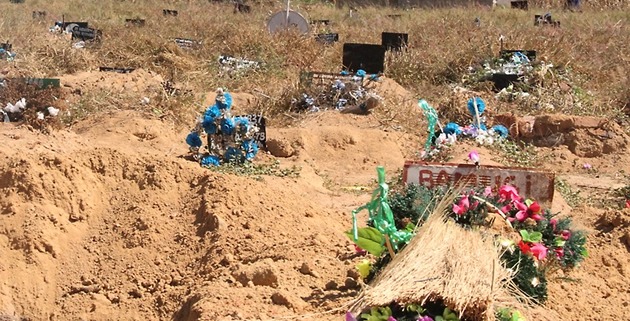 Two mourners stripped naked and engaged in sexual intercourse on top of a grave in broad daylight and in full view of other mourners at Dangamvura Cemetery on Thursday last week.

The shocking incident was reportedly initiated by a well-known commercial sex worker only identified as Tatenda or Mai Keisha after she undressed while asking if anyone was willing to be intimate with her.

A middle-aged man who is understood to be a loafer who frequents the area near Sakubva Roundabout accepted Mai Keisha’s invitation.

The incident has since gone viral on various social media platforms after other mourners filmed the act.

Meanwhile, a brother to the deceased, Fungai Mazvita Karinda told The Manica Post that the family was not happy with what the mourners did at Maroni’s burial. He said:

We are not happy at all with what happened during the funeral of our departed brother. These people started their uncouth behaviour while we were still at home.

As a family, we tried by all means to stop them, but they turned a deaf ear to us.

We told them that while they were his friends, they should respect us, but they never relented.

We hope and pray that these people will be arrested because they literally hijacked my brother’s funeral to parade their shamelessness.

Up to now, we are yet to come to terms with what we saw during our brother’s funeral.

We thank you for bringing this matter to our attention. We will pursue it until the culprits are brought to book.

Those who engaged in the act, those who filmed it and the ones who paid the two people to engage in it have cases to answer. This is a serious matter that deserves our attention.

We surely cannot tolerate such wayward behaviour. People cannot be intimate in public, let alone on a grave during a funeral with onlookers cheering as if they are watching a soccer match. It is unacceptable.