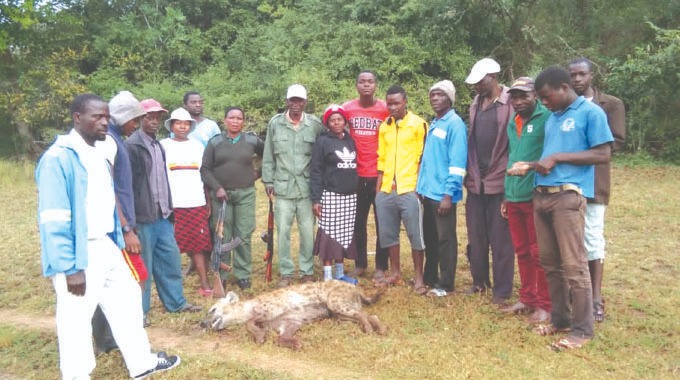 Villagers and a Zimparks ranger gather around the carcass of one of the hyenas that attacked a Zaka man, his wife and son on 25 July 2022

A couple and their son were mauled and badly injured by a clan of hyenas in Mapfumo village, Bota communal lands, Zaka District on Monday afternoon as they tried to protect their livestock from the wild animals.

The hyenas attacked Rwatinga Maroyi and pinned him down and as his father, Robert Maroyi, sought to save him, the animals jumped on him.

The mother of the house, Muchanyara Munodya, rushed to the scene and was badly mauled on the hands and lost both palms.

The Maroyis were rescued by other villagers who managed to scare away the hyenas.

All three are now hospitalised at Musiso Hospital where their condition is critical but stable.

Robert’s brother who declined to give his name told The Herald that the trio was badly injured though the doctors expressed confidence all the victims will recover. He said:

It was a terrible incident and doctors are trying to repair the victims but now all three cannot feed themselves.

They are being assisted to feed. You need a strong heart to look at them. Robert’s face was left tattered and his chest as well. It is terrible.

It is unimaginable that one would sleep today with both their hands but before sunset the following day, they no longer have hands and have to be fed, bathed and clothed by someone.

Zimparks spokesperson Tinashe Farawo confirmed the incident saying a team of rangers was on the ground to trek the hyenas.