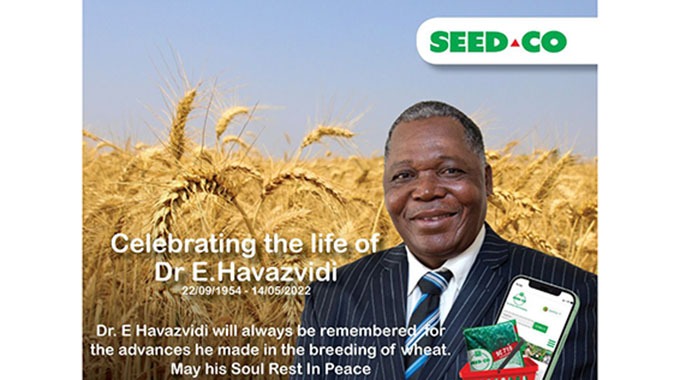 It is with heavy hearts that the Zimbabwe Plant Breeders Association (ZPBA) has learnt with shock of the untimely passing on of an esteemed ZPBA member and highly decorated wheat breeder Dr Ephraime Havazvidi.

May the Lord be with the family and the plant breeding community during this difficult period.

Since 1982, Havazvidi has released more than 28 high performing varieties of wheat that have been grown in Zimbabwe and other regional countries.

In 2020, he was named among the top 20 most influential in the field across Africa.

Havazvidi held a number of positions in local, regional and international bodies.

These included the WHEAT-Independent Steering Committee of CGIAR CIMMYT and the Zimbabwe Wheat Board (ZWB) among others.

He was the head of the research function of Seed Co Group from 2005 to 2015 and since 2019 held the position of senior group research consultant.

Hazvidi enrolled for a crop science degree at the University of Rhodesia (now University of Zimbabwe) in 1974 and majored in plant breeding and biometrical genetics.

He received his PhD from the Faculty of Agriculture at the UZ in 2003.