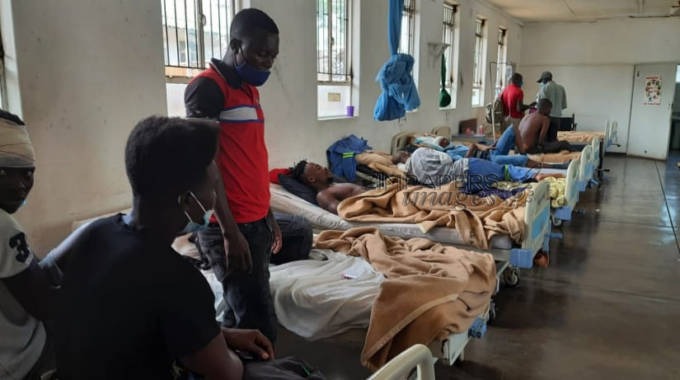 Some of the people injured in the Kariba road accident on Monday night.

Five (5) people have died and twenty-seven (27) more were injured when a UD truck they were travelling in was involved in an accident along the Makuti-Kariba Road.

The truck, which was ferrying civil servants and Kariba residents from Kariba district Independence celebrations in Kasvisva, Nyami-Nyami, veered off the road and fell into a valley about 35 kilometres before Kariba on Monday night.

The injured were taken to Kariba District Hospital. However, authorities have resolved to transfer 19 of the people injured in the accident to Chinhoyi Provincial Hospital to receive specialised care.

Earlier reports indicated that four people died on Monday. One of the injured people, a woman, sadly passed away on Tuesday morning, taking the death toll to five.

The Zimbabwe Republic Police (ZRP) has confirmed the accident, saying the names of the deceased will be announced in due course. ZRP said in a statement:

The ZRP confirms a fatal road traffic accident which occurred at the 40km peg along Makuti-Kariba Rd, on 18/04/22 at 2145 hours where four people died while 32 others were injured after a ZEDTC Nissan UD70 truck in which they were travelling in, went off the road and crashed.

The names of victims will be announced in due course.

We had a very unfortunate incident in our district of an accident that has left five people dead and 27 others injured.

We are currently gathering all the information and mobilising resources to ensure that the 19 people transferred to Chinhoyi and the clinical staff get there.