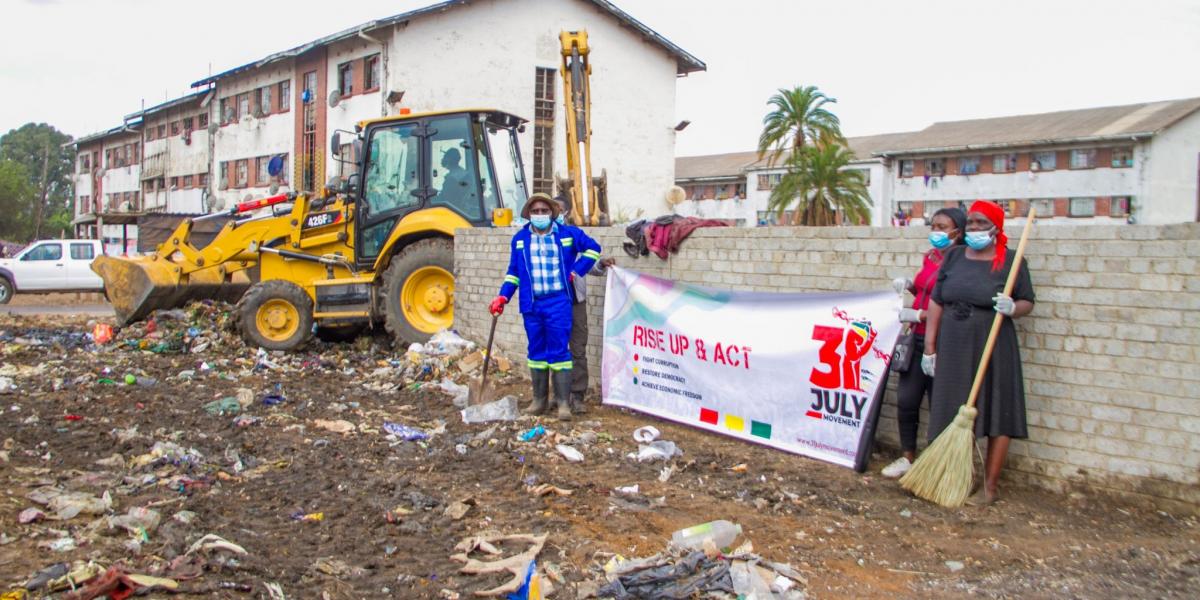 Jacob Ngarivhume during a Cleanup campaign in Mbare.

In a Facebook post this Sunday, Ngarivhume characterised corrupt State agents as “criminals” hunting down citizens to rob them of their hard-earned cash. Below is Ngarivhume’s post in full:

I decided to join a young business partnership, Zimgrains, seemingly building up well in Zimbabwe on one of the trips to procure groundnuts in the Chikore area in Headlands.

It was on a Thursday, and their target was to come back there the following day, a Friday, go into product preparation with a target to deliver 5 tonnes on the coming Monday. It was a tight business schedule.

They were hiring a 10-tonne truck and the driver was a jovial young man called John. We left Harare for Chikore at 7 AM.

Moyo as company founder was on the trip to make sure that all goes well. To cut on costs he left his car behind and decided to just use the 10-tonne truck together with his procurement team.

By 10 AM we were stopped at the Marondera police block. John was informed his truck had a tampered third plate. We were directed to go to the Marondera traffic police camp.

The arresting details simply instructed us that they are going back to the block and will only come back to the station for ‘talks’ after 4 PM.

They laid out the procedure to John which basically was that they are booking the truck, check the reg book, check if the truck was a stolen one or ever used in an armed robbery.

If cleared then John would be asked to fix the third number plate and get the truck back. This was expected to take days!

When they left John and Moyo started calling around. When the officer in charge of the station came back in the office at 5 PM, the truck was cleared to pay a fine of 2 000 rtgs and then released.

The ordeal was not over yet, a drunk police officer took a further 2 hours to receipt John. We were out of the station by, 8 PM. Moyo was clearly worried by the time.

We got to Chikore just before midnight, there was nothing more to do that late. By 4 AM the following morning buying of the nuts and loading started. This took a whole day and evening. The team finished this hard work by 4 AM.

We set back on the road by 5 AM on Saturday. The travel back seemed smooth until a VID twin cab signalled John to stop near Zimre turn off.

Without coming to where John pulled off they expected John to then do what is normally done.

At this point, none of us had much money on us. John asked for money and I gave him the last 3US, I had on me.

John went out and after a few minutes, he came back. He reported back to us that they have refused to accept 3US.

They were saying it’s too little, make it 10US or at least 5US if you are too dry. John honestly did not have.

I asked John what his crime was and he said the lady did not say anything she simply asked for the money.

In no time the young smartly dressed lady arrived at the truck for the first time since the whole incident and asked for John’s driver’s license.

When she got it she simply said we go and meet at VID Eastlea. She started walking back to their car.

I was cross and went out of the truck, and ran to her and introduced myself. I asked her what was the crime of the truck and she said none.

We simply want to weigh the truck to confirm if the weight does not exceed 10 tonnes. If it does not you get your license and car back at VID. I asked for her name she refused with it.

I then took pictures of their vehicle including herself. We drove to VID Eastlea. The time was midday when we were initially stopped.

When we got to the weighbridge at VID the mass of the truck was 8.5 tonnes, well below the designated 10tonnes.

As John was about to get his license back from the senior inspector who had weighed the car the arresting officials came and informed the inspector as well and John that they are impounding his car for further inspection although his car passed the weight test.

John tried to plead with them and they plainly told him that his refusal to pay them at least 5US in Zimre was costing him.

When he offered to pay the 10US, they said now they can’t take it because they are afraid of that guy, referring to me.

John and Moyo were crushed. The truck was impounded and all the paperwork done. The procedure was explained to us.

After impounding the truck they were going to ask John to bring the reg book, then take it to the pit for inspection on Monday, after inspection, they will ask that John fix the vehicle challenges while they are holding on to the truck and the load. When the truck passes the reinspection they will then release it.

I asked Moyo and John if I could call officials from the Zimbabwe Anti Corruption Commission and we can try setting up a trap. They said no.

They were of the view that nothing will come out of that. They felt they were so helpless and in fact, they are aware of all this corruption going on on Zimbabwe roads.

I then decided to confront the head of VID. I asked for him and none was very helpful till I went to the office by myself.

I asked him if it was acceptable that our truck is impounded for one matter and when it passes they impound it for inspection. He said to me “yes” it was possible.

I then confronted him about the procedure of having to inspect the car on Monday when the vehicle clearly had a load to deliver and it was still 1 PM, why wait till Monday.

He assured me that the truck can go through the processes even without a reg book. He would ask us to bring the book later.

We joined the queue to the pit for inspection, I called my colleague to bring me some money for potential fines.

Meanwhile, we had not had a bath all this time, no food, we were looking more like homeless people.

When our turn arrived we got into the pit for inspection, after an endless period the inspector came out with his report. The truck had no major faults!

We were asked to pay 2 000 rtgs fines at VID. We were then asked to go to Harare Central Police to pay further fines to the police.

I had asked my colleague to come so we rushed to central Police where we waited for two hours to pay the fines. It was another 3 000 rtgs.

We got back to VID and the release process started slowly. The releasing officers were clearly unhappy that we were going out on the same day we were impounded.

As we left the VID offices to go to Avondale where Moyo processes the nuts it was already 5 PM.

Moyo was under pressure for time. He thanked me for confronting the VID boss on duty that day.

I went home to take a bath, refresh and get a proper meal. I was hurt, this is what it means to live in a country where corruption has destroyed the fabric of the nation.

Hardworking citizens go through torture to go about their business.

It’s a criminal offence to be a citizen. Criminals hunt down citizens and rob them of their hard-earned cash.

We need to fight until we are free. Citizens need to stand up with one voice and say enough is enough.

3 comments on ““It’s A Crime Being A Zimbabwean Citizen”, Ngarivhume Comes Face To Face With “Stinking” ZRP, VID Corruption”