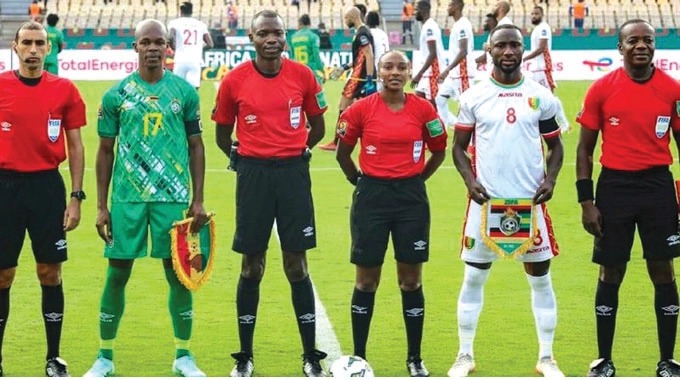 Rwandan referee Salima Mukansanga (third from right) lines up with the assistant referees, the fourth official and the captains of Zimbabwe and Guinea, Knowledge Musona (second from left) and Naby Keita (second from right) before an Africa Cup of Nations Group B match at Stade Ahmadou Ahidjo in Yaounde, Cameroon, on Tuesday night. Mukansanga became the first woman to referee a Nations Cup game in this match. — AFP

Warriors coach Norman Mapeza has commended the Confederation of African Football (CAF) for appointing a female referee in Zimbabwe’s 2021 African Cup of Nations Group B match against Guinea (AFCON) on Tuesday evening.

Rwandese referee, Salima Mukansanga (35), became the first-ever female referee to take charge of a match at the AFCON finals.

Previously the Mukansanga was the fourth official when Guinea defeated Malawi in another Group B match on 10 January in Bafoussam.

Mapeza said it was his wish to see other female referees officiating at major tournaments such as the FIFA World Cup. Said Mapeza:

I think it was good (having a female referee) and I think she did very well. Games for men are always difficult.

Tempers run very high but I think that lady did very well and I think it’s a big achievement for CAF for giving a lady an opportunity to be the centre referee for the game.

My wish is now to see other female referees officiating at other bigger tournaments like the World Cup but I think they (CAF) did very well to assign that lady for our match.

We saw a good match. We played well, unlike the matches against Senegal or Malawi. I would like to thank my players who controlled the game, especially during the first half.

In the second half and after having conceded a goal, my players who lack experience were somewhat unsettled.

Frappart, who was also 35 at the time, became the first female official to take charge of a major UEFA men’s competition event. She was assisted by Manuela Nicolosi and Michelle O’Neal