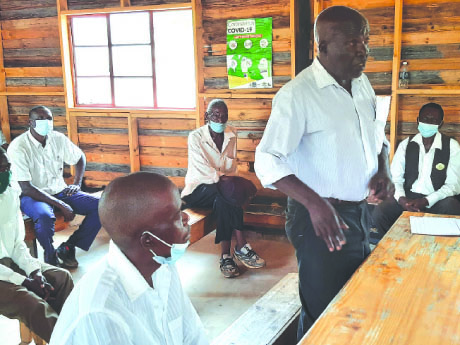 An alleged avenging spirit of a Chimanimani woman is reportedly tormenting the families of her two daughters-in-law after she died with bitterness in 2008.

The late Panganai Muzuzu of Nechirinda Village under Chief Muusha was allegedly poisoned to death by her daughters-in-law and her alleged avenging spirit is now fighting the duo.

It is further alleged that Muzuzu’s manifesting spirit also accuses surviving members of her family of doing nothing to ensure that her alleged killers pay for their crime.

Mazuzu allegedly revealed the names of her alleged killers to close relatives while on her death bed at Mutambara Mission Hospital.

Chief Muusha briefly presided over the matter before referring it to Acting Chief Saurombe who adjourned it to 16 January to allow all the parties involved to attend.

Speaking to The Manica Post, the deceased’s brother, Tizai admitted that his late sister told them before she died that he had been poisoned by Wadzanai Chisara and Sibusisiwe Nzara, her daughters-in-law.

He said he never took the allegations seriously thinking that it was just the usual animosity between a mother-in-law and daughters-in-law. Said Tizai:

Ignoring her last words has cost us as a family. She is seeking retribution from her killers now domiciled in South Africa.

My late sister is now attacking her grandchildren and my children. She wants the culprits brought to book.

When she was on her death bed at Mutambara Mission Hospital following her poisoning, she confided in us the names of the people who had administered the poison on her. Even the medical doctor confirmed that she had been poisoned.

When she disclosed the issue to us, we never took her serious thinking that it was the usual bad blood between a mother-in-law and her daughters-in-law.

It is alleged that one of Mazuzu’s daughters-in-law, Nzara was having marital problems with her husband, Darlington Zuvarigere and the two fought frequently.

After the burial, a traditional healer reportedly confirmed the allegations against the two daughters-in-law and their accomplices.

Nzara is also reported to have confessed her involvement in her mother-in-law’s death and even paid an admission of guilty fine at Chief Muusha’s court.

Darlington reportedly fled to South Africa with his wife and has never returned to Zimbabwe.

We tried to engage lawyers so that the matter can be dealt with by the police. We wanted Sibusisiwe Nzara to be extradited from South Africa and face justice here.

However, we ended up dropping the case after failing to pay the lawyers. We do not know what to do.

We do not know if the Government can help with her extradition because we need closure to this issue, otherwise the whole family will perish.

Darlington and his wife are reported to be refusing to be involved in resolving the case and this has left the family in a fix.