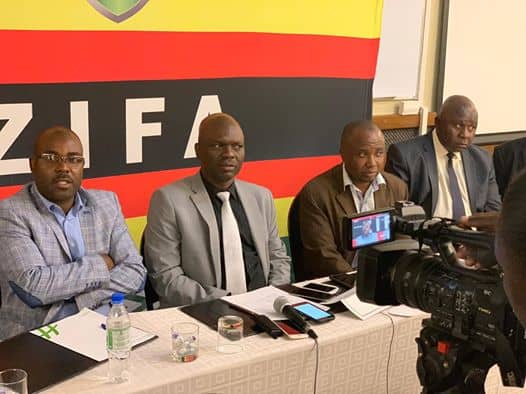 The Warriors’ participation in next year’s Africa Cup of Nations (AFCON) finals hangs in the balance after the Government-appointed Sports and Recreation Commission (SRC) suspended the Zimbabwe Football Association (ZIFA) with immediate effect.

Football’s world governing body FIFA disapproves of governmental interference in the running of member associations and has banned countries from all forms of football as a result in the past.

SRC chair Gerald Mlotshwa, who is President Emmerson Mnangagwa’s son-in-law, said they made the decision following several incidents of gross incompetence on the part of ZIFA contrary to the national interest. Added Mlotshwa:

We are prepared in many respects for whatever might happen.

If FIFA decides to ban Zimbabwean football we are prepared for that. If it does happen we look at it being a short-term measure.

Zimbabwean football needs this opportunity just to fix itself – if we are out of international football for a year, two years, that’s fine.

If we are suspended from AFCON next year we are prepared for that, that is fine, we need to deal with football.

The SRC took similar action in 2019 with Zimbabwe Cricket (ZC), setting up an interim leadership and receiving a three-month suspension from the International Cricket Council (ICC).

The ICC readmitted ZC after the reinstatement of the board.

Meanwhile, the Felton Kamambo-led ZIFA board on Tuesday withdrew referees resulting in the abandonment of a number of Castle Lager Premiership Matchday 2 games.

Five games were lined up on Tuesday, and the affected matches include Highlanders vs Ngezi Platinum, Triangle vs Dynamos, Yadah vs ZPC Kariba, and Cranborne Bullets vs Bulawayo Chiefs.

The suspension of the ZIFA Board comes two days after the men’s national team ended their 2022 World Cup qualifying campaign with a 1-1 home draw against Ethiopia.