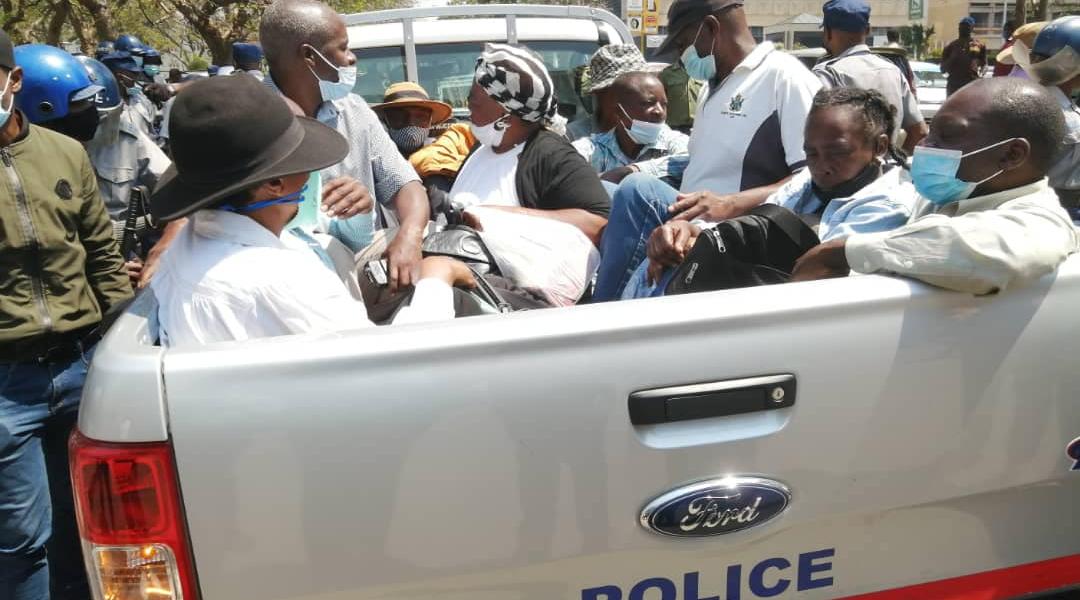 Forty (40) war veterans who were arrested in central Harare on Tuesday for protesting paltry pension payouts are being charged with inciting public violence.

Following the arrests at Africa Unity Square, some of the ex-combatants were taken to Harare Central, Highlands, Rhodesville and Borrowdale police stations where they are still being kept.

The war veterans intended to march from Africa Unit Square to President Emmerson Mnangagwa’s office where they would submit a petition detailing their grievances.

In a statement on Wednesday, the Zimbabwe Lawyers for Human Rights (ZLRH) said they are being charged with inciting public violence. ZLHR said:

ZRP are charging 40 former liberation war veterans with participating in gathering with intent to promote public violence, breaches of the peace or bigotry as defined in section 37 of the Criminal Code.

ZRP accuses the former freedom fighters of singing “revolutionary” songs after they allegedly refused to comply with a directive to only allow 5 of them to hand over a petition detailing their grievances against the Government at Munhumutapa building and parliament.

The war veterans are being charged after we wrote a letter to ZRP Commissioner-General demanding their release stating that their arrest was arbitrary and unlawful as they had not been advised of the charge since around 10 am when they were arrested on Tuesday.

We indicated that ZRP’s actions were a violation of the war veterans’ fundamental right to liberty enshrined in the constitution.

The war veterans are represented by human rights lawyers Paida Saurombe, Blessing Nyamaropa and others.