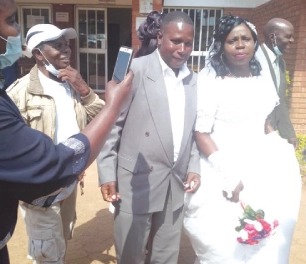 A Chipinge woman gatecrashed her only daughter’s wedding at Chipinge Magistrates’ Court last week on Friday after she discovered through the grapevine that the latter was tying the knot without her knowledge.

Jane said she raised her daughter single-handedly risking being jailed by selling dagga to raise her school fees.

She had to be escorted to Chipinge magistrate, Franklin Mkwananzi’s chambers for a meeting with the other parties.

Mkwananzi ruled that Jane had no right to stop the wedding since her daughter was an adult blessed with three children.

He added that her daughter had the right to invite guests of her choice.

In anger, Jane stormed out of the meeting and hurled unprintable words at Sithembile’s friends and other guests. She said:

You are my only daughter. What crime did I commit for you to submit me to such humiliation? Surely, how can you wed without my knowledge?

Your Worship, I struggled to raise my daughter, and look at how she is repaying me.

I used to sell dagga to raise money for her school fees, and look what is doing to me. You can arrest me now, I don’t care about anyone.

Jane then grabbed the wedding cake and vanished from the scene.

Sithembile and the groom, Kenious Makanyanya, eventually exchanged nuptial vows when peace had been restored.

The couple’s family and friends later managed to raise R500 to buy another cake.

In a telephone interview with The Weekender after the wedding, Jane said she would not forgive Sithembile for snubbing her at her wedding.

However, her daughter Sithembile, said she holds no grudges with her mother. She said:

I have no grudges with her, but the wedding was a private affair. I will invite her to forthcoming events.