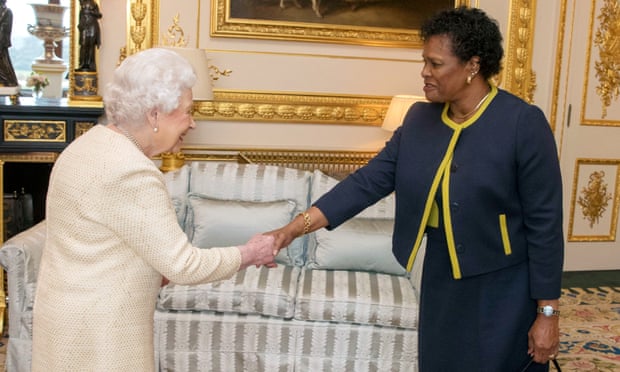 Dame Sandra Mason, the governor-general of Barbados, will replace the Queen as the island’s head of state. Photograph: Steve Parsons/PA

Barbados has elected its first president with just weeks to go until the former British colony becomes a republic and ceases to recognise the British monarch, Queen Elizabeth II, as its head of state.

The Barbados parliament on Wednesday elected almost unanimously the Caribbean island’s governor-general, Dame Sandra Mason as the president. Only one MP declined to vote.

Mason is a 72-year-old judge and former ambassador. She will be sworn in on 30 November, the 55th anniversary of her country’s independence from Britain in 1966.

Barbados Prime Minister, Mia Mottley, hailed what she called a historic landmark for the island of about 290,000 inhabitants. She said:

How can anyone deny the rightness of the moment?

The island of about 290 000 inhabitants announced its decision to part company with the monarchy in September 2020 amid an intensifying global debate on the malign legacy of colonialism and racial injustice.

Speaking at the time, Mason argued that the time had come for Barbados “to fully leave our colonial past behind”. She added:

Barbadians want a Barbadian head of state. This is the ultimate statement of confidence in who we are and what we are capable of achieving.

Barbados is not the first Caribbean country to forsake the Queen. Guyana did so in 1970, four years after gaining independence from Britain.

In 1976 Trinidad and Tobago did the same, and two years later, Dominica. Barbados may also not be the last.

Its decision to become a republic has amplified a long-running debate in Jamaica over whether it should also turn away from the monarchy.