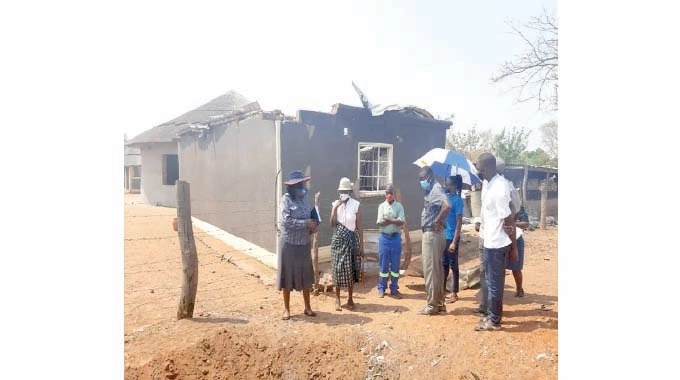 Members of the Lupane CPU visit Mrs Mufukare’s homestead yesterday where a bomb explosion took place on Sunday blowing off the roof of a house (Picture Credit: Chronicle).

A suspected war-time bomb exploded at a homestead in Lupane on Sunday afternoon, blowing off the roof of a house and damaging three huts at neighbouring homesteads.

There were no casualties. Preliminary investigations suggest the bomb could be an anti-tank landmine designed to damage or destroy armoured vehicles that was planted during Zimbabwe’s liberation war.

Matabeleland North police spokesperson Inspector Glory Banda said the blast was triggered by a fire that had been lit and left burning at a dumping site.

Insp Banda urged members of the public to be wary of suspicious-looking substances. He said:

Circumstances are that on the 3rd of October 2021 at about 3pm, the informant Tinashe Mufukare aged 33 of Hildeguard Mufukare’s homestead assigned one of the domestic workers to dispose of litter at a rubbish pit. He lit the fire and left the dumping site.

After some minutes an explosion was heard from the dumping site and it caused cracks on the two-roomed house, and also shattered the screen of a Toyota Hilux double cab which was also parked in the yard.

… We appeal to members of the public not to tamper with anything that is metallic in nature and looks suspicious lest they detonate explosives.

Whenever they discover anything suspicious, they should report to the nearest police station.

The explosion’s vibration was also felt at the Lupane District Development Co-ordinator’s office, close to 10km away from the homestead.

We went there in the morning as CPU and found that the explosion had left a trail of destruction.

The two-roomed house at Mrs Mufukare’s homestead is a write-off while several other structures were damaged but fortunately, no one was injured.

It is suspected that it could be a bomb that was left during the liberation war and we have requested the security to do investigations speedily so that we are assured that people are safe.

We have sent an appeal to stakeholders to assist with building material for the affected families.

One Comment on “War-time Bomb Blast Destroys Houses In Lupane”