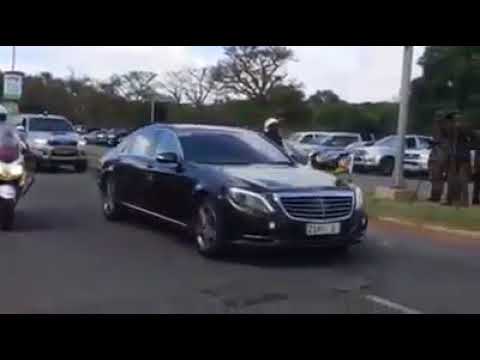 President Emmerson Mnangagwa Saturday travelled by road the 352-kilometre stretch from Bulawayo to Lupane to officiate at the commissioning of the Lupane water supply station and Bubi-Lupane Irrigation Scheme acceleration model.

He is usually flown in the presidential helicopter and the airforce’s choppers which of late have been giving him problems.

In August, the presidential helicopter was forced into an emergency landing over 60 kilometres southwest of Harare due to a technical failure.

Addressing delegates at the commissioning, President Mnangagwa said the name change to the Ministry of Lands, Agriculture, Fisheries, Water and Rural Resettlement to include rural development in its portfolio was after a special request from the responsible Minister, Dr Anxious Masuka.

It is the second time this year after Fisheries were also included in January. Mnangagwa said:

As I recognise Minister Masuka, I must say that he has requested that we add rural development to his portfolio of which I have agreed. I must point out that this is the first time in all my years in Government that a minister has actually come to me and requested a name change.

He said rural development would remain at the core of the Second Republic’s thrust noting that it was now up to everyone to play a role in that regard.

Mnangagwa added that true empowerment and sustainable development will only be realised through the greater participation of communities, especially women and youth in national development projects and programmes.

Today, the guest of honour having travelled by road all the way from Bulawayo, he did not fly, he said; ‘I want to see the problems affecting people in Matabeleland North from their roads right up to their projects’. So he travelled here by road, trying to pick up all the issues and so he has now arrived to launch the Agriculture Rural Authority Vision 2030 accelerator model programme.

In his address, Minister Masuka said his ministry was now preoccupied with rural development and would ensure that most projects that they embark on will have a bearing on the country’s endeavour of Vision 2030.