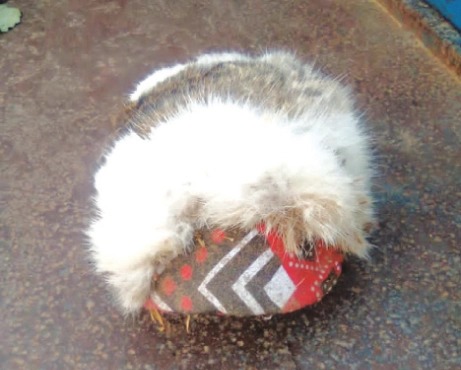 A Rusape woman recently woke up to find a live tortoise wrapped with a multi-coloured cloth (retso) and rabbit skin in her garden.

Tambudzai Makombe of Sanzaguru has witnessed mysterious happenings in her yard in recent weeks, phenomena that have left both traditional leaders and spiritualists baffled.

Barely a week after a mysterious fire exploded in her garden and some paraphernalia associated with witchcraft found in her yard, on Monday Makombe was visited by the strange tortoise.

The reptile, wrapped with a multi-coloured cloth and rabbit skin was seen roaming in the garden by Makombe’s grandchild who was sweeping the yard.

The tortoise was later removed by a cleric, Apostle Petros Kembo.

Headman Sanzaguru, Stephen Kamangira, confirmed the incident to Manica Post, saying he was gobsmacked with what is haunting Makombe. He said:

A live tortoise wrapped with a retso and rabbit skin was found on Monday morning at Ms Makombe’s house. Ms Makombe’s grandchild who was sweeping the yard saw it.

Everyone was shocked by the discovery and Apostle Kembo who removed the paraphernalia which was found at Ms Makombe’s gate was summoned again and removed the tortoise.

I am not sure whether he killed it or not, but what I know is that he took it away. We have advised Ms Makombe to seek help from both spiritualists and traditionalists.

When contacted for comment, Makumbe could only say: “I do not have anything to say. Please, let me rest.”

Apostle Kembo said he could not comment without Makombe’s consent.