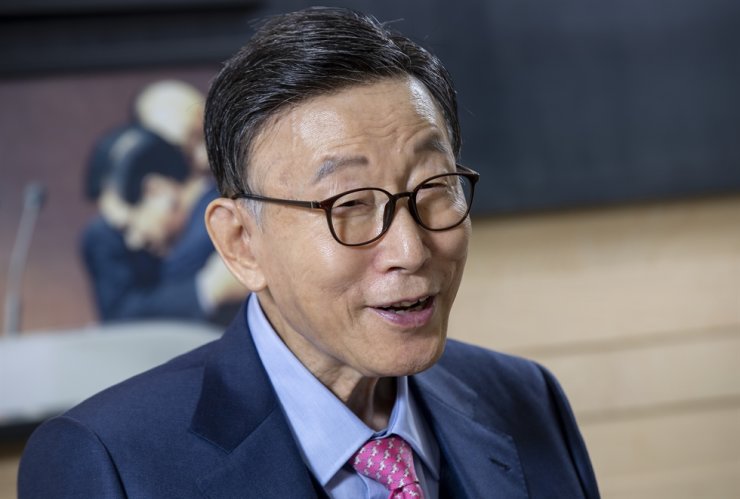 Rev. Cho Yong-gi, founder and senior pastor of the Yoido Full Gospel Church, speaks during an interview with The Korea Times at the church office, Seoul, March 27, 2020. Korea Times photo by Shim Hyun-chul

David Yonggi Cho, the co-founder of Yoido Full Gospel Church, has died. He was 85.

The church is the world’s largest congregation headquartered in Seoul, Korea, which encompasses a network of churches that once claimed more than 800 000 members.

Yonggi Cho, who retired from leading the church in 2008 and was named pastor emeritus, died at 7:13 AM at a Seoul hospital, on Tuesday.

According to The Korea Herald, he had been under medical treatment suffering a cerebral haemorrhage since July last year.

Yonggi Cho was born in 1936 as the eldest of nine children in the southeastern rural county of Ulju to a family with Buddhist beliefs.

His family moved to the southern port city of Busan after the 1950-53 Korean War broke out.

He is known to have come to believe in God after being diagnosed with pulmonary tuberculosis when he was 17 years old.

He was introduced to Christianity through a friend of his sister and decided to follow the religion.

Cho met with Kenneth Tice, a missionary from the Assemblies of God, an American Pentecostal denomination in Busan and began helping him.

In 1956, he entered a Full Gospel college in Seoul to study theology. While there, he met Choi Ja-shil, who later became his mother-in-law and a close religious associate.

After graduating in 1958, he opened a tent church in northwestern Seoul, which later moved to Yeouido, a financial district in the capital, and became Yoido Full Gospel Church.

In 1993, the church was recognized by the Guinness Book of World Records as the world’s largest single congregation with around 700 000 members ― it currently has 570 000, The Korea Times reported.

He engaged in many social activities other than religious pastorship at the church.

He established the newspaper Kookmin Daily in 1988 and set up Good People, an international non-government development organization for human rights, environment and child welfare.

In 1996, Cho received the Order of Civil Merit Mugunghwa Medal for supporting the free treatment of children with heart disease.

In 2009, he was awarded a medal by the Cambodian government.

Cho stepped down as a senior pastor of the Yoido Full Gospel Church in 2008 and served as a pastor emeritus.

He was sentenced to a two-and-a-half-year prison term suspended for four years in 2017 for causing 13 billion won ($12 million) worth of losses to the church by instructing its staff to buy unlisted stocks at prices over twice the market value.

His funeral will be held Saturday at the grand hall of Yoido Full Gospel Church in central Seoul after days of mourning, according to the church.