In what has been described as a low blow, controversial Norton politician, Temba Mliswa has accused Jah Prayzah of sleeping with married and engaged women.

Said Mliswa in a short thread:

@jahprayzah you need to stop the habit of sleeping around with married women or women engaged to other men, on the promise that you will take care of them and their children. That’s a very bad habit. Unoita vana vatambure zvisina basa and unozvishoresa.
It has become your practice and as someone whose music I enjoyed very much this habit of yours is very unfortunate and pathetic. You are bringing confusion into people’s lives. Kana une nharo nazvo taura ndikubvisire maV11.
We are not pained by your success but this habit of yours is wrong. Handidi kutaura zvakawanda and will stop there unless you need the evidence.

This is a low blow @TembaMliswa.

These so called married and engaged women are adults who define their lives.

Why does this suddenly come out after @jahprayzah was detained at the airport after playing a concert at Mugabe’s son-in-law’s birthday?

Another prominent social media personality, LynneM claimed she had found the reason for Mliswa’s sudden accusation:

Tadzifamnira…This is the reason why @TembaMliswa is angry with @jahprayzah. His baby mama Cynthia Mugwira has become extremely close to the lanky entertainer Temba has 2 children with Cynthia. Temba is angry that Cynthia has introduced the hit maker to her family and kids. 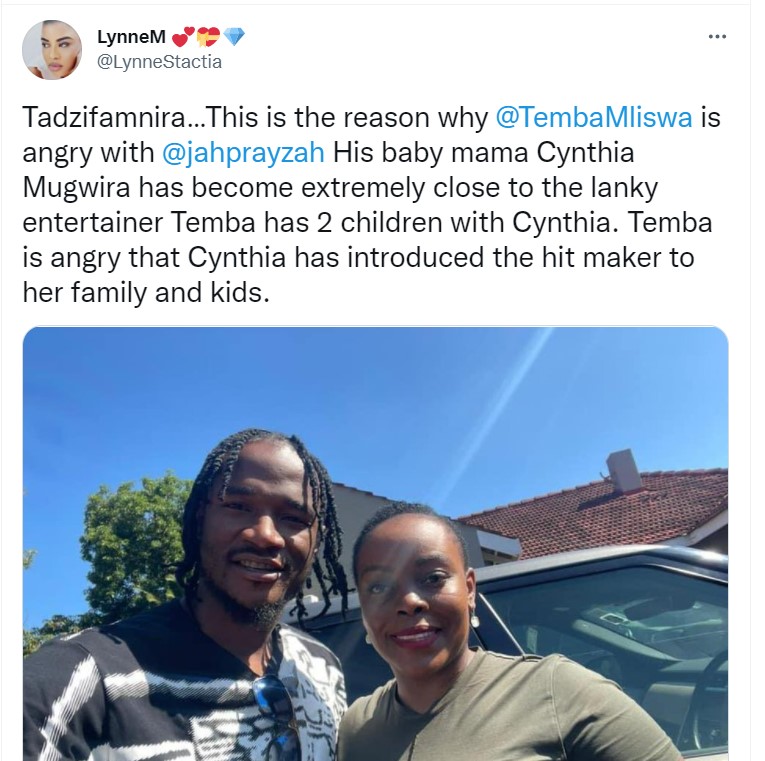 Other social media users commented that Mliswa had no moral standing to advise others given that he is himself not married and has not shied away from stating that he has 19 children with various women.

Mliswa however posted another thread advising people not close to the details to not comment:

1/I’ve received numerous DMs regarding the Jah Prayzah @jahprayzah tweet. Note fans, this isn’t a dig at the artist. My best advice to all is if you’re not his lawyer, it’s best not to comment. I’ve done the most responsible thing and unless one is in the loop, silence is golden.

2/If I have to release the videos, messages & pictures, it’s not fair as it has an adverse effect on other family members & even children so I’ve decided not to. This is good enough. FYI, I’ve previously taken the opportunity to warn JP about this behaviour through his manager.

3/ There was an article released before for those of you who remember. However, despite the warnings, JP continued. The rest is really up to him. He’s a great young man with a shining career, in fact I love his music and respect his artistry. Separate the person from his music

4/ Morality is morality however and if one cannot abide by the moral ethics of relationships, it’s best to remain single. This is advice not just for JP, but for all. So hold your horses everyone, don’t comment out of ignorance, even though you may be a fan.

5/ My final comment is that there’s the aspect of morality which cannot be ignored. Unfortunately there are some who are innocent, who inadvertently suffer the consequences when it’s violated. I’ll not comment further on this…..

Jah Prayzah has not commented on the accusation.