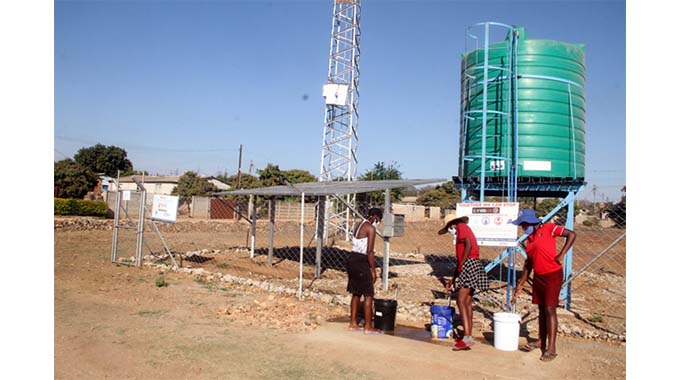 This article was sponsored by the Coca-Cola Foundation

Funded by a USD 50,000 grant from The Coca-Cola Foundation, DanChurch Aid has overseen the completion and handover of seven boreholes to the Bulawayo City Council management.

The solar-powered boreholes in Emakhandeni, Pumula, Nketa and Emganwini suburbs of Bulawayo will benefit over 25,000 people.

The project which was initiated in February 2021 is focused on addressing the problem of inadequate water and poor sanitation in low-income urban communities in Bulawayo that will also contribute towards mitigating the spread of the ongoing COVID-19 pandemic.

Bulawayo has perennial water shortages and outbreaks of diarrhoea and typhoid are common in the community as a result of people using contaminated and unclean water.

The Coca-Cola Foundation, the philanthropic arm of The Coca-Cola Company, granted US$50,000 to DanChurchAid Zimbabwe for the much-needed water and sanitation project to provide clean and safe water to the urban poor in selected high-density suburbs of Bulawayo.

The Bulawayo City Council identified and availed the locations in the areas with the most need.

“This project is built on the success of the Coca-Cola Foundation’s Replenish Africa Initiative (RAIN), which improved access to clean water for six million Africans in more than 4,000 communities across 41 countries”, said Coca-Cola Foundation President, Saadia Madsbjerg.

“Our strategy is to deploy Coca-Cola Foundation funds in a way that emphasizes more sustainable, efficient water usage, helps address local water challenges and partners with others to improve watershed health and enhance community water resilience. These projects uplift lives in these communities, in particular women and girls. Our giving strategy has a strong emphasis on understanding the local context and needs of communities, which then informs the choice of appropriate interventions”, added Madsbjerg.

DanChurchAid Country Director Mads Schack Lindegaard said, “this project has enabled us to take a step towards empowering communities to fight against the COVID-19 pandemic, while delivering on the vital human need, of access to water.”

“The provision of the solarised boreholes will alleviate climate change-induced water shortages in low-income residential areas housing some of the poorest and most vulnerable people in the city, which has been made possible through a generous grant from The Coca-Cola Foundation.”

The Mayor of Bulawayo, Councilor Solomon Mguni welcomed the project saying it will assist Bulawayo City Council to the extent that it is likely to lift the water-shedding programme earlier than scheduled owing to the improved supply throughout the year.