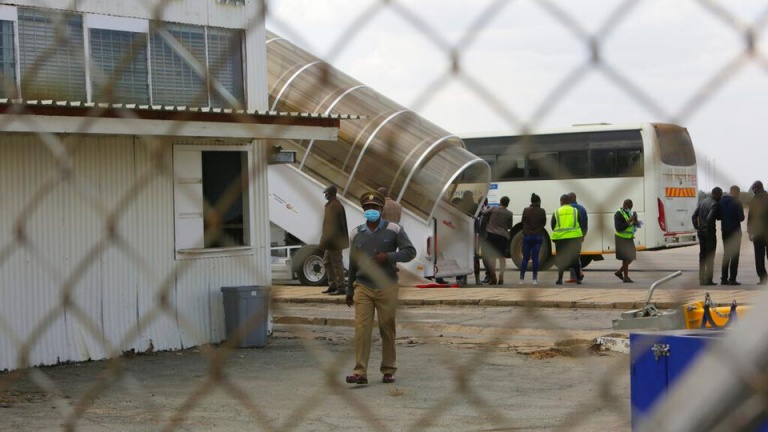 Police patrol the airport upon the arrival of Zimbabwean Nationals deported from the United Kingdom, at Robert Mugabe International airport in Harare, Thursday, July 22, 2021. (AP)

One of the 14 Zimbabwean nationals who were deported last week from the United Kingdom (UK) has reportedly tested positive for COVID-19.

This was claimed by exiled former cabinet minister Jonathan Moyo in a post on microblogging site Twitter on Thursday.

Moyo said one of the 14 deportees who are quarantined at the Zimbabwe Institute of Public Administration and Management (ZIPAM) tested positive for coronavirus but nothing was done to separate the victim from others. He tweeted:

Reports indicate that initially the UK plane was supposed to deport about 50 people but the Home Office was advised that some of the returnees were self-isolating after an outbreak of COVID-19 at Brook House near Gatwick, a detention centre.

The deportees were convicted for various crimes in the UK, including murder, rape, robbery among others and they are deemed “Foreign National Offenders” by the UK government.

The deportees are expected to join their local families after 10 days if they test negative.