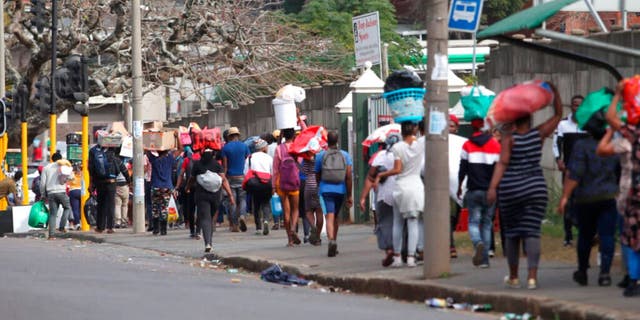 Police in Bulawayo on Thursday intercepted a haulage truck that is suspected to have been carrying smuggled goods looted in South Africa.

Our men were on patrol and intercepted this truck along the Zuva garage. They saw this truck offloading goods into the other truck and when they approached the truck one of the trucks took off.

It is then when police discovered that this haulage truck has these goods. The driver of the white truck was chased by police and dumped the vehicle only to appear this morning.

From the look of things, it is visible that these goods did not enter the country legally. The proper destination of this consignment is Msasa in Harare.

You may be aware that there were lootings in South Africa and we suspect that these are some of these goods.

We are now investigating how these goods managed to get into the country and who the owners are.

Comm Mbangwa called on members of the public to report any suspects with looted goods to their nearest police station.

He said Zimbabwe’s relationship with South Africa should remain cordial as it is and the ZRP will not allow Zimbabwe to be a destination for stolen goods that belongs to a neighbour. Added Comm Mbangwa:

We would want the members of the public to police each other so that we apprehend criminals. We should not be a destination of stolen goods, it is not good as neighbours, and people lost their property during the looting. Our relationship with South Africa should remain cordial as it is.

Recent deadly riots in South Africa’s Kwazulu-Natal and Gauteng Provinces resulted in the looting of malls and warehouses and the closure of busy highways, with the country economy estimated to have lost over 20 billion rands.