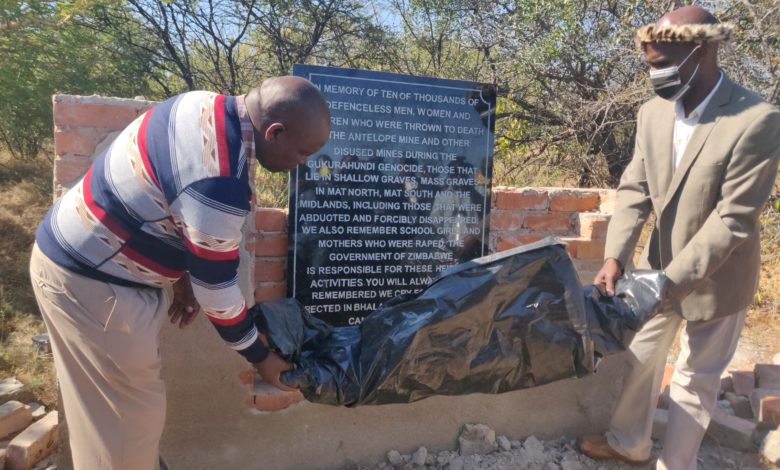 A Gukurahundi memorial plaque erected on Sunday at Bhalagwe in Maphisa, Matabeleland South, in memory of the victims of the 1980s massacres has reportedly been stolen, CITE reports.

Bhalagwe bore the brunt of the North Korean-trained Fifth Brigade operations as thousands were killed and buried in mass graves.

During the memorial service, a plaque in memory of the Gukurahundi victims was erected to replace a tombstone that was erected at the same site in 2019 before it was destroyed by suspected security agents.

I just received the information that the Gukurahundi memorial plaque that we installed yesterday has been stolen.

Fuzwayo said the plaque had cost them US$300 excluding transportation and other necessities. He added that they will find other means to install another plaque at the site.

Reports indicate that police initially blocked roads leading to the camp and detained traditional chiefs and other guests for hours before they were given the go-ahead to proceed with the event while observing COVID-19 regulations.

Speaking on Tuesday at the Bhalagwe turn off after they were detained by the police, Fuzwayo, said:

It’s either the police are defying the President or the President misled the nation but the truth of the matter is we want to go and replace the plaque that they stole because I strongly believe that the state was behind the removal of that plaque that we had erected in 2018.

We reported it to the officers and they did nothing but what they are good at is always trying to ensure that the people of Matabeleland do not remember the people who were killed by the government but honestly speaking the plaque will be erected and we will always remember the victims.