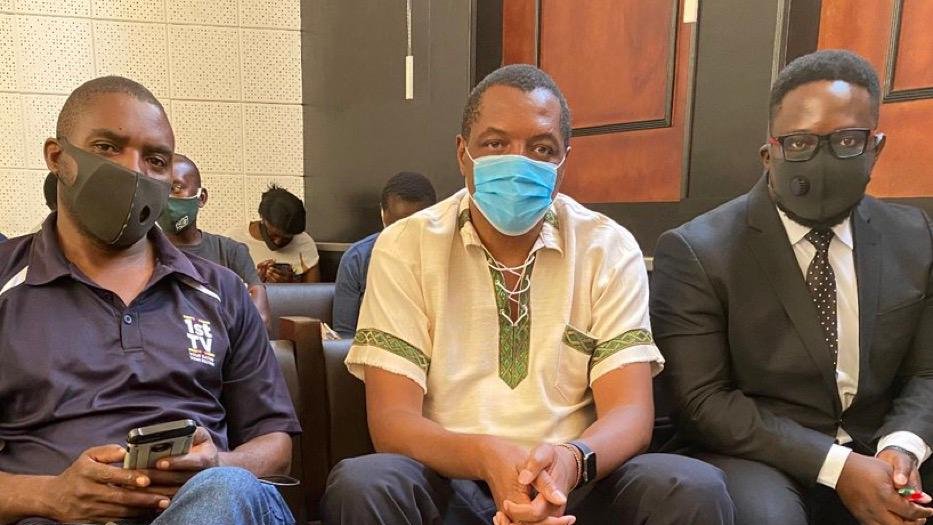 Journalist Hopewell Chin’ono is fighting in telecoms tycoon Strive Masiyiwa’s corner amid attacks by some citizens who accuse the latter of being capitalistic and squeezing them of their money through his Econet Wireless. Below is Chin’ono’s statement.

When I posted a London Times article saying that Zimbabwean businessman and philanthropist, Strive Masiyiwa, had become the first black billionaire living in Britain to make it into the iconic The Sunday Times Rich list, there was the usual dark and unrestrained vitriol against him.

They hate Strive Masiyiwa who hasn’t forced anyone of us to use his mobile phone service, yet they love crooks that they have christened MBINGA, crooks that steal their tax money through corrupt and looting scams hand in glove with ZANU PF elites.

At least Strive Masiyiwa doesn’t force us to use his mobile phone service, we have a choice to select from, there is also NetOne and Telecel Zimbabwe.

Why aren’t we going there if we feel so angry with Stive Masiyiwa?

It because most of this anger is rooted in ignorance and raw jealousy of not wanting to see one of us make it, yet we are happy to applaud crooks.

Some his company Econet sold sim cards for US$100 per card, and they also blame Strive Masiyiwa and Econet for that, oblivious to the laws of Economics.

That shows a tragic misunderstanding of the economy and how it works, a further act proof that we are not as educated as we would want the world to believe.

It is the ZANUPF Government that screwed up the economy not Strive Masiyiwa or Econet.

Common sense should make you ask one question, when Econet cards were sold for US$100, how much were Telecel and Netone sim cards selling for?

There is something from the terribly wrong with our education system bakhiti, it has brought out half backed citizens!

Some complain about Econet prices, have they ever heard of Potraz which is responsible for pricing and is run by a former CIO director on behalf of the Government of Zimbabwe?

Don’t you know that Potraz even came down hard on Econet Zimbabwe for lower prices, and on Netone too for similar competitive pricing?

Your money from high fuel prices to steep data prices is taken by Government of Zimbabwe high taxes because your government has failed to create a healthy tax base because of incompetence, looting, corruption, plunder and many other such ills!

So, the Government of Zimbabwe charges huge taxes to the few big businesses that are in existence like Econet. That is why we are encouraging you to #RegisterToVoteZW to change that sad uneconomic reality!

A clever person will calculate how much Strive is getting out of every dollar you pay towards Econet data or phone calls, and how much money your government is taking!

Strive Masiyiwa’s prices are not high, you just don’t have the money to buy his products because you have no job to go to, or you are underpaid in your current job.

Econet Zimbabwe is a business, not a charity or church organization which dishes out money like confetti for free!

Deal with the reasons why you don’t have money, instead of expecting another man to take State created losses on your behalf!

You don’t have enough money because the economy is crap;

Is it Strive Masiyiwa who is refusing to implement political and economic reforms so that the economy can be kickstarted again?

Is it Strive who is looting your taxes and plundering your nation’s natural resources leaving you with nothing meaningful in your pocket?

It is called Economics folks, it has nothing to do with Strive Masiyiwa’s companies, they are also victims of an incompetent Government.

Is it fair for me to insult my new father in-law because I have failed to pay dowry for my wife simply because I don’t have a job or I earn peanuts like most Zimbabweans do?

This is where we should apply critical thinking!

Strive Masiyiwa’s Econet had to borrow huge loans internationally at higher repayment costs because Zimbabwe is a bad debtor, and politically a pariah state! This is why we keep telling you that Zimbabwe is badly run, the government has failed you not Strive Masiyiwa!

He has kept thousands of Zimbabweans in work and pays the most taxes in Zimbabwe which are looted by your government, yet you are ok with your MBINGAs who are looting those taxes and shamelessly parading sports cars?

You are paying for the behavior of an incompetent and corrupt government!

Leave Strive Masiyiwa alone, if you don’t like his service, go to Netone or Telecel, nobody has been forced to stay with Econet!

Strive pays millions of dollars in license fees to the Zimbabwean Government, yet Netone and Telecel don’t pay those fees.

He has expanded the Econet coverage across the country using borrowed money, loans that must be paid back in US Dollars, yet we pay for Econet’s service in a useless untradeable RTGS currency, and the Government can’t give him US Dollars in exchange in order to pay repay the loans which have made it possible for you to get better coverage

Is that not the reason why you stay with Econet, good coverage?

You stay with his company because it is the better out of the three, and he has been able to stay afloat in difficult times regardless of the terrible operating conditions!

Give the brother a break!

Some Zimbabweans have a warped mentality of wanting Econet to be ok, and Harare City Council to be ok yet they forget that these entities are operating in a terrible economy!

You can’t expect an island of excellence and normalcy in a sea of mediocrity, corruption, looting, plunder, incompetence, and the list goes on.

If you fix your politics, the economy will be fixed too.

But how will that happen when you openly declare with a smile that you won’t vote?

You are the problem not Strive Masiyiwa!!!

You must first understand who is responsible for mobile phone pricing in Zimbabwe, and you also need to understand how much of that money goes to Strive Masiyiwa’s Econet, the lastly how much is going to Government, and how it is being used!

Reserve your anger for the right people! Things are bad because Zimbabwe has a bad and incompetent Government in place!

Strive Masiyiwa didn’t do anything unique between 2009 and 2013, Tendai Biti simply fixed the economic fundamentals and things started working well that is why the price of the simcard went down from US$100 to US50 cents.

When you say ED Pfeee as some of you continue to do, embrace the consequences too of wanting a clueless government, and a corrupt group of people in power! To those who say they don’t do politics, this is what we mean when we say if you don’t to politics, politics will do you!!!