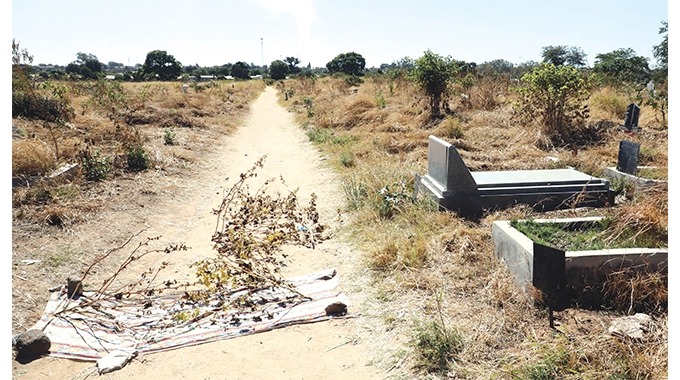 The spot where a Pelandaba West man was murdered while his wife sustained injuries.

A couple from Pelandaba suburb in Bulawayo was attacked by robbers, leading to the death of the husband while the wife escaped with chest stab wounds.

The incident also brought to the fore the collapse of the city’s emergence services after they failed to show up to ferry the victims to the hospital.

Misheck Rindai Mapeta (54) and Sarudzai Portia Showa (43) of Pelandaba West, both devout members of the Mugodhi Apostolic Faith Church for the past 20 years, were walking home from a nearby bus stop using a footpath.

Chronicle reported sources as saying one of the suspects grabbed Showa by the right hand, dragged her to the side of the road and stabbed her with a knife thrice on the chest and once on the head. Said the source:

The other two suspects attacked Mapeta as they demanded money and cell phones. They indiscriminately stabbed him on the right eye, back, right rib and head.

Showa, a National University of Science and Technology senior lecturer, escaped leaving her husband at the mercy of the robbers.

She alerted neighbours who accompanied her to the scene where they found him lying unconsciously in a pool of blood.

Mapeta died before he and his wife were taken to the hospital.

Shylet Phiri, a neighbour, said a week hardly passes by without an incident involving rape and robbery in the suburb. She said:

We are having cases of people being mugged and raped at the cemetery almost every week, but sadly police are not doing anything in terms of arrests. The moment it gets dark, the cemetery and surrounding areas turn into a no-go area.

These robbers waylay people at the cemetery soon after dropping off at the bus stop. Residents, especially women are no longer safe particularly in the evening because we don’t have buses accessing the suburb because of poor roads.

She urged members of the public to avoid using bushy footpaths, especially in the evening as they risk their lives.

Bulawayo Chief Fire Officer Linos Phiri said they will investigate his charges’ failure to respond to the call for help.