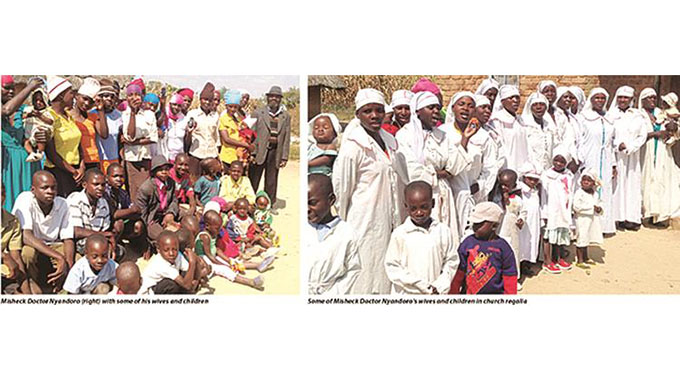 A man from Mbire District, Mashonaland Central Province, has fathered 151 children with 16 wives and he is still going strong.

Misheck Nyandoro, who married his first wife in 1983, told The Herald that polygamy is a project and he will not stop marrying and fathering children until he dies. He said:

I am planning on taking in my 17th wife this winter and the formalities are already being worked on. I will tell you when she comes in.

Nyandoro has 50 children who are still in school in Mbire, Harare, Mutare and Guruve and little everywhere else, six are employed by the Zimbabwe National Army, two by police and 11 others are employed in different professions.

He has married off 13 daughters. Two wives are pregnant. At least 23 of his sons are married, one of which is distantly following his father’s footsteps, on a count of four wives.

Nyandoro was born in Mbire District north of Harare in 1955. He joined the Johanne Marange Apostolic church in 1972. He then joined the liberation struggle in 1977 and was trained at Mgagao Camp in Tanzania.

He said his children pamper him with gifts daily and his wives bring him food daily one by one. Said Nyandoro:

Every wife cooks her best every day because the rule is I only eat what is delicious and I throw away what is not tasty.

Every wife subscribes to that rule and does not get annoyed when I return her badly cooked food to her. It is the rule here. Rejected food should make her cook better next time.

Nyandoro decides the night duty roster for his wives’ conjugal rights. He said when planning the roster, he takes into consideration many factors. No wife knows she is on duty until he visits her bedroom. He still boasts of his virility. He said:

I am strong and feel as strong as I was when I was 18. I give conjugal rights to an average of four wives a night and I do the duty roaster personally.

I go to the targeted bedrooms one by one. That is my job. There is no other job I do. They are all catered for and you can see they are happy.

Afternoon conjugal rights are not considered during the duty roster, for, that is mainly accidental.

Nyandoro’s family mainly relies on farming, courtesy of the land reform programme and after each harvest, he shares accordingly.