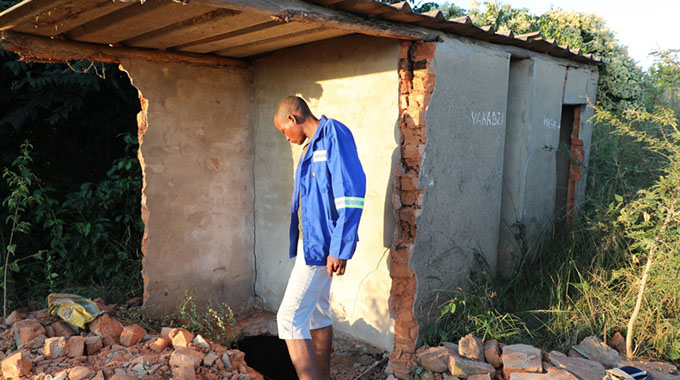 The Blair toilet where Dilan and Melissa’s bodies were dumped. — Pictures : Tinai Nyadzayo

The two Mutasa Grade One pupils who were brutally murdered and their bodies dumped into a disused Blair toilet have been laid to rest.

Dilan and Melissa Benza (both seven-year-olds), who were cousins, were finally laid to rest yesterday (Friday), 11 days after their gruesome murder.

The two were murdered on their way home from Mbaza Primary School last week and the prime suspect is Solomon Manyama, Dilan’s maternal uncle.

Manyama and his co-accused, Passmore Kumbirai Sambaza have since appeared in court facing murder charges and were remanded in custody to 6 May.

The bodies were squeezed into the pit of a blair toilet at an abandoned homestead about four kilometres from their homes and they both had their throats slit open.

Lydia Manyama, Dilan’s mother, is yet to come to terms with her firstborn child’s death. She told Manica Post:

Dilan and Melissa were cousins. They were inseparable, even in death. They would walk to and from school together.

On the fateful day, there was a School Development Committee meeting at their school and I attended the meeting. However, I left a bit early.

I never harboured thoughts that I would never see my son again. I went back home to attend to other chores.

As Grade One pupils, I expected the two to arrive home earlier than other students. However, they delayed coming home.

Around 3 pm, I started feeling that something was amiss as they would usually arrive home around 1 pm.

I checked with Melissa’s parents and they said she was also yet to arrive.

When we started looking for the missing children, a neighbour suggested that we communicate with Solomon as he was among the last people to leave the SDC meeting.

When we called him, he said he had last seen the children near the Kavhuru homestead. We combed the area but did not locate the children. We even searched the nearby Nhindiwa River, all to no avail.

We called Solomon again and this time he said he had last seen the children near the school grounds looking for wild fruits.

Solomon is my uncle. He was also close to the children as he was a regular visitor to our place.

I never suspected that he would ever be linked to the disappearance and murder of my son. His involvement, in this case, is a bitter pill for me to swallow.

I was there when their bodies were retrieved from the toilet. At that moment, my heart broke.

I just couldn’t accept what was unfolding before my eyes. The sight was just not fair for me and I fainted.

Melissa’s father, Douglas Benza, wants justice to prevail, even it means the banishment of the perpetrators from the area. He said:

Even if the perpetrators are convicted and given lengthy jail terms, we will never be able to co-exist with their families. These people do not have a place in our society.

They should be relocated to another area because I cannot continue interacting with them. In fact, they should undergo the same pain that our children went through.

One Comment on “Murdered 2 Mutasa Grade One Pupils Finally Buried”