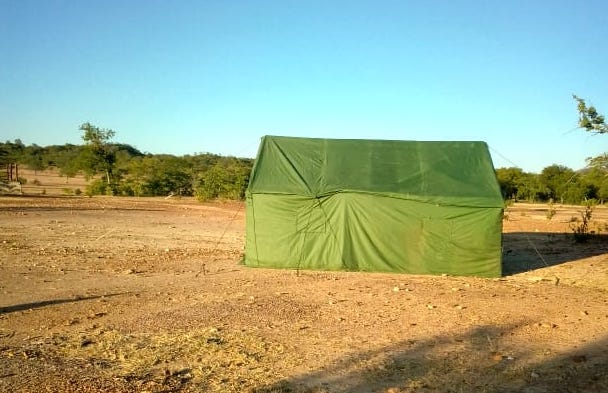 The Dinde Community in Hwange is facing a serious predicament at the hands of the government. They face expulsion from their ancestral homes to make way for a Chinese mining company, Beifa Investments (Pvt) Ltd, all in the name of “development”.

Beifa was granted a mining exploration permit by the Government to conduct exploration activities in the Dinde area. A large cross-party section of the Dinde Community is opposed to this unwelcome intrusion into their way of life. They have protested but so far to no avail.

One Never Tshuma was arrested & detained after leading a community protest. Although Tshuma is a ZANU PF member and has been condemned by leaders of his own party, he has received solidarity & support from the local MDC Alliance MP, @molokele & the rest of the community.

Tshuma is being charged with inciting public violence, the same offence for which Makomborero Haruzivishe was unjustly convicted by the regime in a different matter. Tshuma is one of the leaders who are resisting the unpopular intrusion of the Chinese company.

Tshuma appears to have been thrown under the bus by his party. There is suspicion that the local ZANU PF & traditional leadership have been compromised & are batting for the Chinese company under the guise of development. It’s telling that Beifa reported its case to ZANU PF.

How does a foreign investor deal with a political party on matters of investment and law enforcement? This conflation between party and state is dangerous. From reports in Dinde, this is not simply a ZANU PF issue. This is a community issue regardless of party affiliation.

All this is done in the name of “development”. But “Development” is a complex process that is not one-dimensional. For local communities, there are certain intangibles to which they place value in their lives, which may not seem so to investors & bureaucrats sitting in Harare.

So-called “development” that fails to respect the interests, rights and expectations of local communities is not worth it. They have also seen how the extractive state & its local & foreign elites have plundered resources elsewhere leaving local communities with nothing.

Diamonds in Marange, Black Granite in Mtoko, plush tourist resorts in Hwange, Gonarezhou & others – local communities have nothing to show for the resources upon which these multi-million dollar businesses are built. Therefore, they are sceptics of the “development” narrative.

The government must respect the people of Dinde just like it must respect the Chilonga community and others around the country. It is notable that in both cases, vulnerable & often neglected & forgotten ethnic minorities are at the rough end of this mistreatment.

In Chilonga it was the Shangaan. In Dinde it’s the Nambya and Tonga. The government has long neglected these areas & the first thing it does is to send a foreign company to disrupt their way of life. At least start by fixing roads, schools and hospitals there. Show you care!