The Ministry of Foreign Affairs and International Trade has confirmed that Nyasha Mugwagwa is one of the twelve people who were killed when militants attacked Palma in northern Mozambique. Nyasha had been reported missing. His family this Monday, however, reported that he had died. We present the Ministry’s statement below.

PRESS STATEMENT BY THE SECRETARY FOR FOREIGN AFFAIRS AND INTERNATIONAL TRADE AMBASSADOR JAMES MANZOU ON THE FATE OF ZIMBABWEANS IN PALMA, MOZAMBIQUE.

The Government of Zimbabwe, through our Embassy in Mozambique, continues to work closely with the Government of Mozambique and the companies in Palma to account for all Zimbabweans that were working in that town, following the recent disturbances in Palma.

The Ministry of Foreign Affairs and International Trade in the last statement of 8 April 2021, confirmed that one Zimbabwean was yet to be accounted for. Emerging eye witness accounts are confirming that Mr Nyasha Mugwagwa. a Zimbabwean that worked for the Remote Site Solution (RSS) company in Palma, was among the twelve that were killed in Patina by the insurgents. The twelve have since been buried by the local authorities as their bodies were in a state of advanced decomposition.

I would like to take this opportunity to invite all those whose beloved ones are still missing to get in touch with the Ministry of Foreign Affairs and International Trade on telephone number +263 242 – 794681-5 or 727 005. Consular
Department. 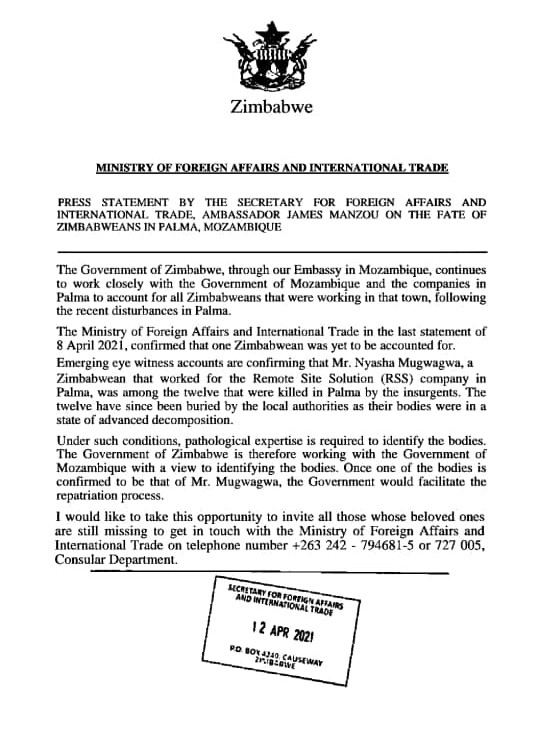