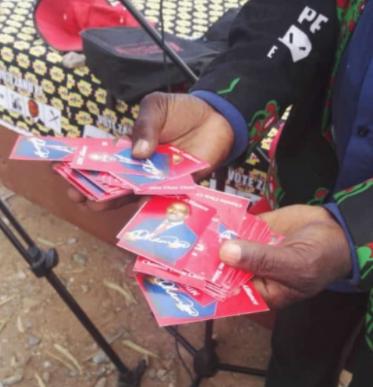 The ruling party Zanu PF has denied claims by the MDC Alliance that the new-minted cards they are parading at their events from alleged MDC Alliance members defecting to Zanu PF are indeed fake, The Herald reports.

The response was given by the Zanu PF spokesperson Simon Khaya Moyo who called the claims by MDC Alliance firebrand politician Fadzayi Mahere “laughable desperate self-serving and self consoling statements”. Said Moyo in his strong-worded response to the claims they printed MDC Alliances cards:

Without meandering, let those making such allegations awaken to the reality that Zanu PF will continue to welcome those coming back home and the party has neither time nor resources to waste printing regalia for embattled political outfits.

We are aware that those laughable allegations are desperate self-serving and self-consoling statements coming from moribund and desperate opposition factional groups that have literally ran out of political oxygen following mass defections of their members coming to Zanu PF.

Let it be known, however, that this should not be misconstrued as a Zanu PF problem, but theirs to solve.

In the face of massive desertion by young people and their founding stalwarts the MDC-A, instead of self-introspection, the best they have done is to attack the former members accusing them for exercising their democratic right to freedom of association as well as accusing Zanu PF of destroying the MDCs by way of accepting and receiving those leaving MDCs. This is not only laughable and shameless, but a clear indication the opposition groups have ran out of steam.

However former Zanu PF politburo member who now leads his own political party Daniel Shumba has said the choreographed defections are nothing but a mechanism to rig the country’s elections in 2023.