The Southern Africa Development Committee (SADC) leadership has been implored to act on the Islamic insurgency in Mozambique that has so far seen hundreds being killed while thousands have been displaced. The Crisis in Zimbabwe Coalition (CiZC) met with The Centre for Democracy and Development (CDD) during which the Zimbabwean crises and the Mozambique unrest was also discussed. Below is CiZC report.

Monday 29, March 2021 The Centre for Democracy and Development (CDD) hosted the Crisis in Zimbabwe Coalition (CiZC) in Maputo, Mozambique from the 23td to the 26th of March 2021 during engagements with civic society and church groups. The Crisis Coalition delegation also met with officials from Mozambique’s ruling party, FRELIMO in a closed session.

The engagements arc part of the Coalition’s efforts to engage CSOs, liberation movements, solidarity partners and regional bodies to find a lasting solution to the Zimbabwean crisis.

As part of the engagements in Mozambique, the Coalition sought an audience with the current Southern African Development Community (SADC) Chairperson and President of Mozambique, Filipe Nyusi. Despite confirmations from his office, President Nyusi was unavailable at the last minute but despite this setback, the Coalition will continuously engage the regional body and other relevant stakeholders as a means to push SADC to act on the dire situation in Zimbabwe.

The Cabo Delgado insurgency in Northern Mozambique was also discussed during the engagements. On engagements with CS0s, Churches The delegation met Civil Society leaders on the 24th of March 2021, and deliberations from the engagements are captured below;

1. The CSO leaders from both countries discussed political developments prevailing in both countries and the need to strengthen people to people solidarity.

2. The meeting emphasised the need to pressure SADC to act on the Zimbabwean crisis and the CSO leaders made a call for the government of Zimbabwe to adhere to democratic values and ensure full implementation of the constitution as well as to stop the introduction of draconian laws like the proposed Patriotic Bill and Cyber Security Bill. The CSO leaders also called upon
the government of Zimbabwe to engage all stakeholders in resolving the Zimbabwean crisis.

3. The CSO leaders expressed disappointment on SADC’s lackadaisical approach in responding to issues affecting the region and called upon the regional body to immediately convene an urgent extra-ordinary summit to discuss issues affecting the region. 4. There was also a resolution to the effect that SADC governments should mobilize resources collectively to cushion citizens in cases of emergencies and natural disasters.

1. The Mozambican counterparts briefed the Crisis Coalition delegation about the crisis in the Cabo Delgado region and called for regional solidarity and support in light of the humanitarian crisis caused by the insurgency.

2. The Zimbabwean delegation expressed solidarity with the people of Mozambique and urged SADC to come up with a crisis response plan to assist the thousands of displaced people in the Cabo Delgado region.

3. The Crisis Coalition delegation made calls for SADC to deploy armed forces to save the situation in the Cabo Delgado region which is threatening regional security.

4. The Crisis Coalition delegation and CSOs from Mozambique expressed deep concern over SADC’s inaction on the conflict in the Cabo Delgado region On engagements with Church leaders The delegation also met with church leaders in Maputo on the 25th of March 2021 and pledged to engage President Nyusi over the Zimbabwean crisis. After the engagements, a Press Conference was held on the 26th of March, 2021 at the Centre for Democracy and Development (CDD) offices in Maputo and addressed by the CDD Director, Professor Adrian() Nuvunga and Crisis Coalition Director, Blessing Vava. 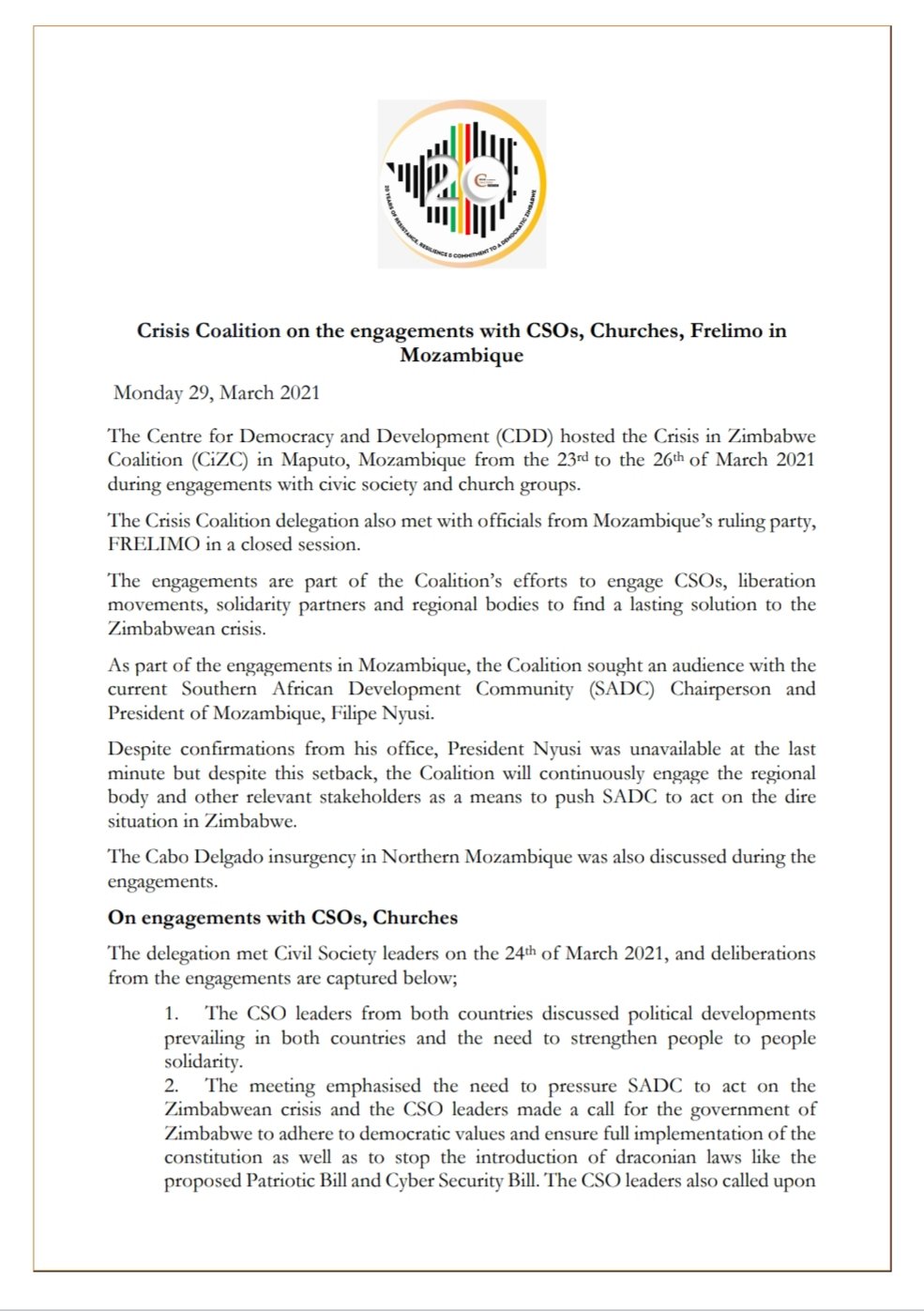 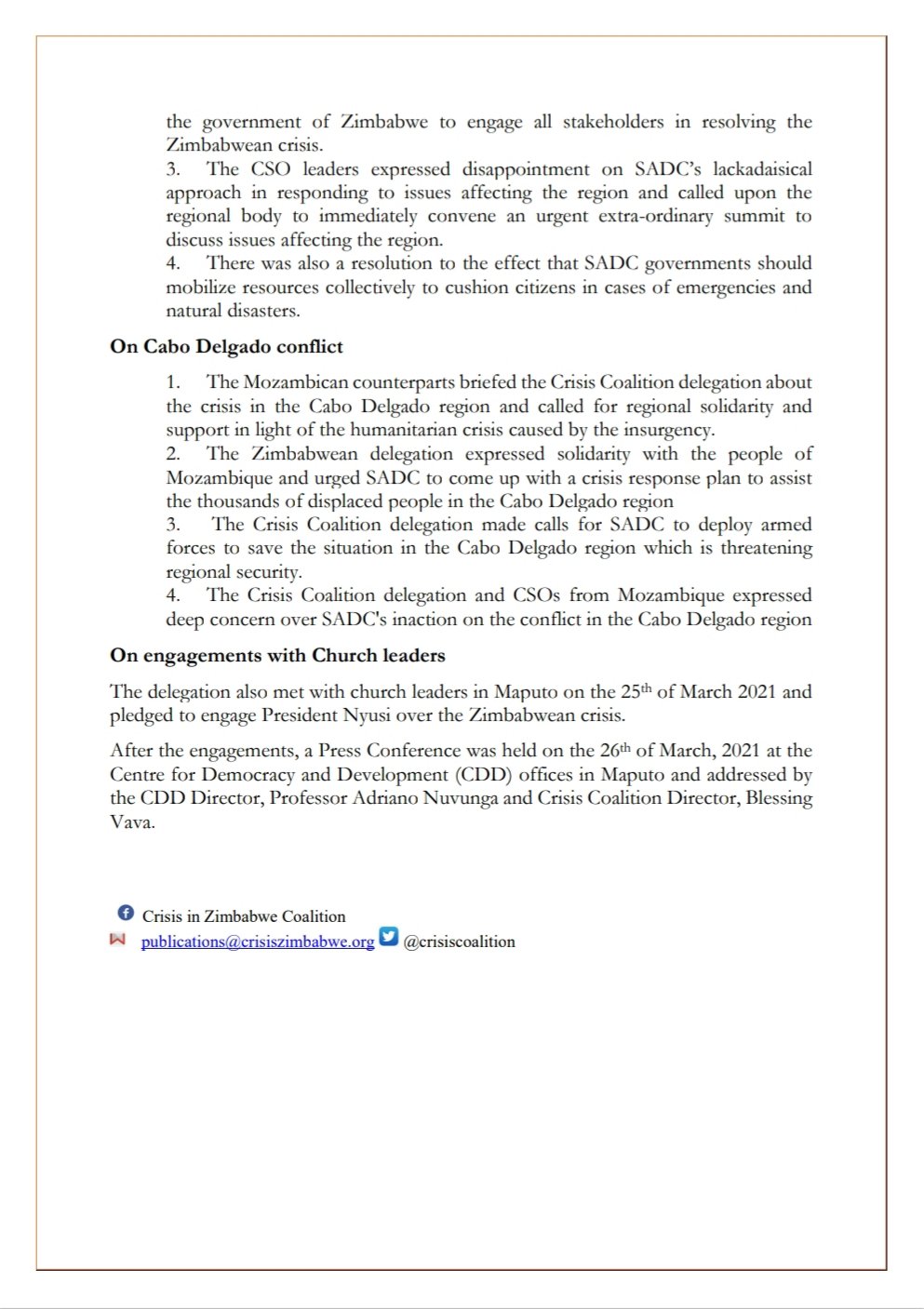