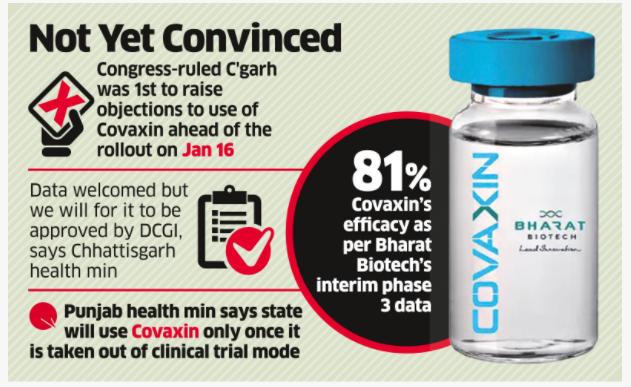 Zimbabwe will today take the first consignment of the COVID-19 vaccines developed in India COVAXIN, The Herald reports. India’s Bharat Biotech developed the drug and they are yet to be formally approved by the Drugs Controller General of India (DCGI).

President Mnangagwa will receive the first batch of 35 000 of the 75 000 that were donated by India while arrangements to have the second batch of 40 000 doses are being made.

This was revealed by the Permanent Secretary in the Ministry of Health and Child Care, Air Commodore Dr Jasper Chimedza who told the publication that:

We are going to take delivery of 35 000 doses of Covid-19 Covaxin donated by the Indian Government, and will be received by the  President.

The delivery is part of the 75 000 doses they donated and the remaining vaccines will be delivered at a date to be announced.

The Indian Government has provided transport for the vaccines, and we expect the plane carrying the vaccines at 5.10pm.

According to BBC, COVAXIN has an efficacy rate of 81%, according to preliminary data gathered from its phase 3 trials. However, according to the India Times, 3 Indian opposition states have refused to use the vaccine as they said it is still to be formally approved Drugs Controller General of India (DCGI) before they agree to use it.

Zimbabwe has so far received 600 000 doses of Sinopharm and SInovac both developed in China of which a huge chunk of them was a donation from the manufacturers.

According to a senior official at the Ministry of Finance, the donations are made by the manufacturers with the promise from the Zimbabwean government that they will purchase more vaccines from the donors.