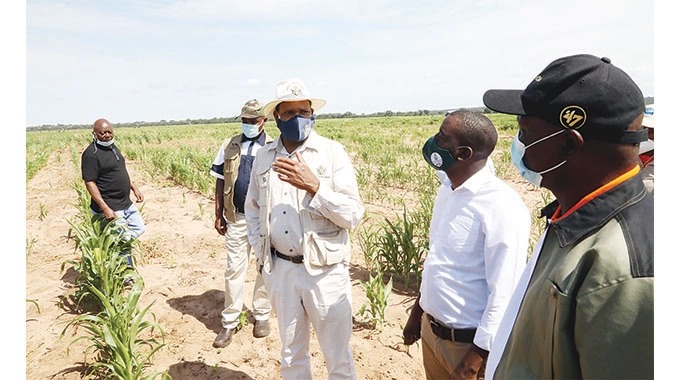 Lands, Agriculture, Fisheries, Water and Rural Resettlement Minister Dr Anxious Masuka stresses a point to the Minister of State for Matabeleland North Provincial Affairs and Devolution Richard Moyo during a tour of Bubi-Lupane Irrigation Scheme in Lupane on Friday (19 March 2021)

Masuka fired the Bubi-Lupane Irrigation Project manager for alleged incompetence and warned that the same fate will befall officials who fail to meet the Government’s expectations in the transformation of the agriculture sector.

However, Chronicle could not establish the official’s name.

The incident occurred on Friday during Masuka’s tour of the Bubi-Lupane Irrigation Project and the Bulawayo Kraal Irrigation Scheme where he was accompanied by Matabeleland North Provincial Affairs and Devolution Minister Richard Moyo. Said Masuka:

I’m not happy with Arda’s performance, you are still in the past. Arda must wake up to the realities of the Second Republic and the President’s thrust of using agriculture as a vehicle for the attainment of vision 2030.

Masuka also announced that henceforth, Government wants ARDA managers to be stationed on-site as opposed to visiting the farms. He said:

When you employ you must pay only a basic survival salary to that scheme manager. It must be a performance-based contract and 75 per cent of the annual salary must come from a crop production bonus.

The crop production bonus is predetermined. For wheat we want 4,5 to 5 tonnes per hectare they (farm managers) get their two per cent on the net.

If they are unable to do that then it means they will be a sunset clause in that contract which says the moment they harvest and it not happened (achieving the yield target) it means the contract automatically lapses.

So, we don’t deal with this perennial problem of hiring mediocre people that do not want to grow this community.

2 comments on “Agriculture Minister Fires ARDA Manager On The Spot”