Opposition MDC-T leader, Senator Douglas Mwonzora Thursday reminded party Members of Parliament (MPs) of their mandate in Parliament. He was speaking at the party’s first Parliamentary Caucus after the Extra-Ordinary Congress which took place in December last year. We present a statement by his spokesperson below.

Today the Party held its 15′ Parliamentary Caucus after the Extra-Ordinary Congress which took place on the 27th of December 2020. President Douglas Mwonzora, together with Vice President Elias Mudzuri. Chairman Morgen Komichi and Secretary-General Paurina Mpariwa presided over the 15′ Caucus for 2021.

President Mwonzora told Members of Parliament that it is their responsibility to serve the people of Zimbabwe. He exhorted them to amplify our call for devolution.

Members of Parliament were urged to raise important issues of national interest such as security of citizenry, preservation of human rights. good governance and democracy. unemployment and food insecurity, among others President Mwonzora called upon our MPs to familiarise themselves with our Party policies which adequately answer almost all of Zimbabwe’s current challenges. Our MPs were further urged to be wary of attempts by government to reintroduce obnoxious laws in Zimbabwe. He stated that our MPs should resist any such laws that are calculated to restrict the already shrinking democratic space, like the proposed Patriotic Act.

He also emphasized the need for the Party to implement gender parity in all positions and enact programs that empower the Youth. Vice President Mudzuri urged the MPs to follow the Party’s Constitution in their conduct. He further reiterated that as social democrats. we understand and respect the existence of various classes and interest groups in our society since we stand for pluralism and diversity.

National Chairman Senator Komichi also called for meaningful and productive debates in Parliament by our MPs. 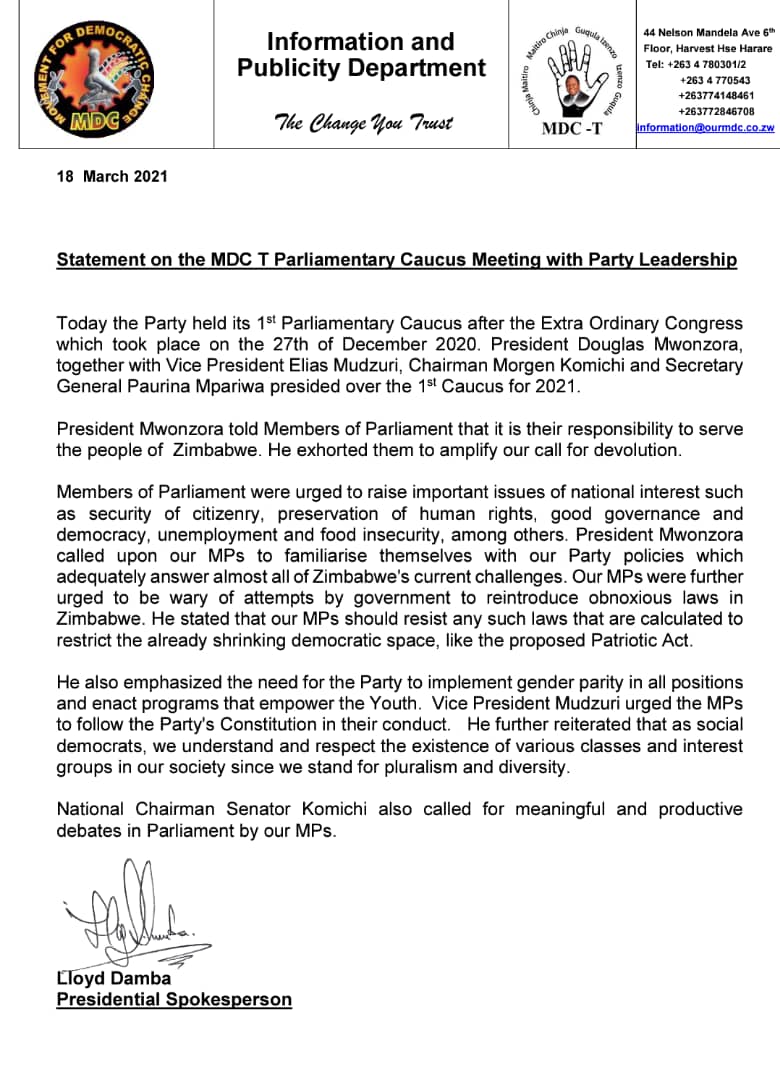