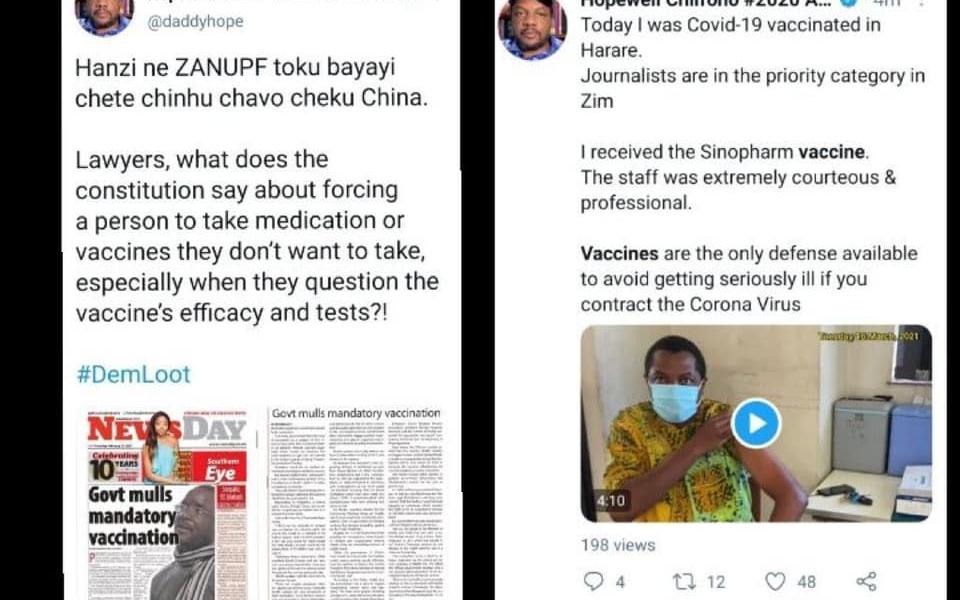 Prominent journalist Hopewell Chin’ono has been subjected to ridicule by some individuals on social media after he received the Sinopharm COVID-19 jab on Tuesday.

Chin’ono shared his photos getting the shot on social media, prompting his critics to mock him for allegedly receiving a vaccine he has spoken against in the past. See the screenshot below:

Posting on his Facebook page about the screenshot, Chin’ono chided his critics, saying this shows that some people are literate but not educated. He said:

I saw this; [screenshot]

it was done by an idiot or dum-dum or both.

It shows that many of our people are literate but not educated, they fail to understand simple things!

The left tweet is valid because I am against citizens being forced, but someone still can’t get that?

You should educate citizens, and win their hearts and minds, not issue threats as Mnangagwa did!

Government has failed to mount an educational and media program yet it set aside US$1.5 million for communications.

It will be looted like any other fund! I got vaccinated because I read about Sinopharm and spoke to my GP and Physician about it!

You can’t use threats to force citizens, that is why I said the State should respect the constitutional rights of citizens in regards to getting vaccinated!

Don’t force people, educate them and win them over, it remains my position!

So the person who made this screenshot is not only ignorant of what they I meant, but they are part of the problem using propaganda where it doesn’t fit!

My first tweet remains valid because I am against citizens being forced!

I made a choice and went on my own accord, that choice should be available to everyone!