A soldier fires shots towards demonstrators, on August 1 2018, in Harare, as protests erupted over alleged fraud in the country’s election. Protests in Zimbabwe’s historic elections turned bloody on August 1 as a man was shot dead during demonstrations over alleged vote fraud and the president appealed for calm. The man died after soldiers fired live ammunition during opposition protests in downtown Harare, AFP reporters saw. / AFP PHOTO / Zinyange AUNTONY

The three victims are lucky to be alive after they were shot in Harare’s CBD when soldiers opened fire on members of the public as they attempted to disperse protesters who were demonstrating against a delay in releasing of election results. The trio is seeking damages for shock, pain and suffering caused by the unlawful actions of the soldiers.

Through her lawyer, Mrs Gloria Dzitiro of Mutumbwa Mugabe and Partner Legal Practitioners, the Defence Minister had requested that the three matters which they had erroneously set down be removed from the court roll. Advocate Wilbert Mandinde who appeared with Mr Darlington Marange from the Zimbabwe Human Rights NGO Forum argued that the error in prematurely setting the matters down deserved to be censured with an order of costs. Justice Mangota agreed and ordered the Minister to pay the wasted costs. The matter will be re-enrolled on the court roll once all pleadings are filed.

The government has claimed that it has fully complied with the Motlanthe Commission recommendations. However, one of the three, Manyeruke, has since taken President Mnangagwa to court seeking an order that the President fully complies with the recommendations as has been claimed by Justice, Legal and Parliamentary Affairs Permanent Secretary Virginia Mabhiza. 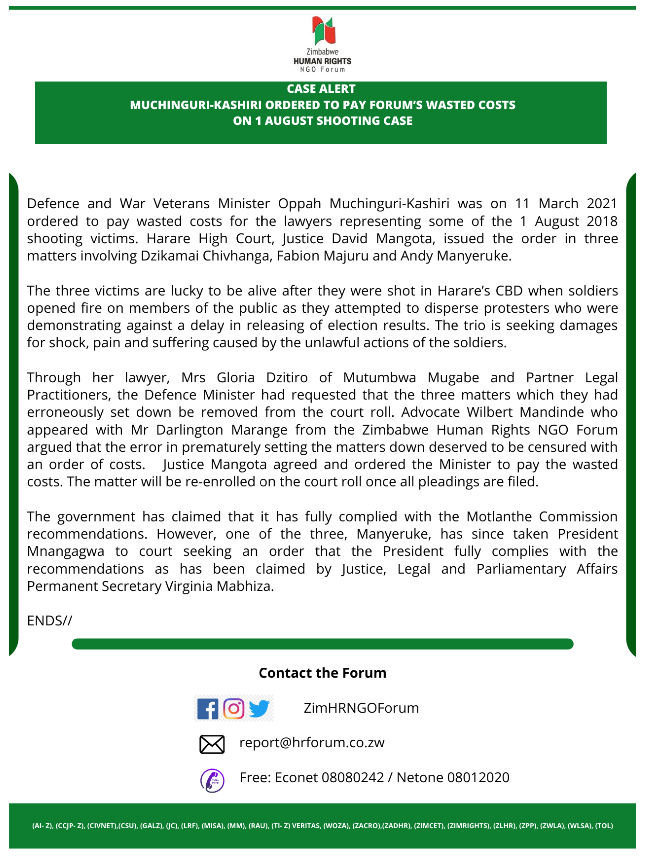