A number of human rights watchdogs including the Zimbabwe Peace Project, Zimbabwe Human Rights NGO Forum, and Amnesty International have called for the safe return of missing journalist Itai Dzamara.

Itai Dzamara was allegedly abducted by suspected state security agents in 2015 after a series of anti-government protests in Harare. The international community and human rights organisations have since then pressuring the government to ensure the safe return of Itai Dzamara.

We present in full below the human rights groups’ joint statement to mark the 6th year since the disappearance of Itai Dzamara.

Today, 9 March 2021, marks the sixth anniversary of the disappearance of Itai Dzamara, a Zimbabwean journalist, civil society activist and leader of Occupy Africa Unity Square. On 9 March 2015, Rai Dzamara was abducted by five unidentified men from a barbershop in Harare’s Glenview suburb. The men reportedly handcuffed him before taking him away in a white pick-up truck with blurred registration number plates. Dzamara had previously been targeted by State security agents, assaulted and unlawfully detained in separate other incidences.

Following this enforced disappearance, Rai Dzamara’s family made a report at Glen Norah Police Station. Despite the police report and persistent widespread calls for investigations into the abduction, the Zimbabwe Republic Police has over the years remained reluctant and uninterested in diligently looking into the matter. Additionally, High Court Judge, Justice David Mangota, ordered the police to fully investigate the disappearance of Dzamara. However, no meaningful investigation has taken place, as evidenced by the absence of any comprehensive reports submitted by the authorities to the courts.

The ‘new dispensation’ prides itself on being reformists. However, the continued abductions and torture of citizens speak to a chilling intolerance to dissent and critique and a State bent on consolidating power at the expense of fundamental human rights of citizens. Despite the reformist agenda preached by the new dispensation, the Forum has realised an increase in organised violence and torture, attacks against democratic space, and attacks against free speech and freedom of expression. The ongoing weaponisation of the criminal justice system for political gain is another example of a government failing to implement its reformist agenda.

We call on the government to mobilise the full extent of its resources to investigate the circumstances surrounding Dzamara’s abduction and to ensure that those responsible are brought to justice. Dzamara’s family and the generality of Zimbabweans deserve answers on where he is, what happened on 9 March 2015 and who is responsible for his disappearance.

We remind the Government of Zimbabwe of its constitutional obligations to safeguard the right to life and personal liberty, the right to participate in peaceful political activities, the right to demonstrate and petition peacefully and the citizens’ right to express themselves freely and without repercussion. We call on the government to show its commitment to protecting the constitutionally-guaranteed human rights of all Zimbabweans, regardless of political beliefs or affiliation.

*We also recommend that:*
• The government takes all necessary measures to guarantee the safe return of Itai Dzamara;
• The government guarantees in all circumstances that all human rights defenders in Zimbabwe are able to carry out their legitimate human rights activities without fear of reprisals and tree of all restrictions.
• The government ratifies, domesticates and fully implements provisions of the United Nations Convention on the Protection of all Persons from Enforced Disappearances and the United Nations Convention Against Torture and Other Cruel, Inhuman or Degrading Treatment or Punishment and its Optional Protocol.
//ENDS// 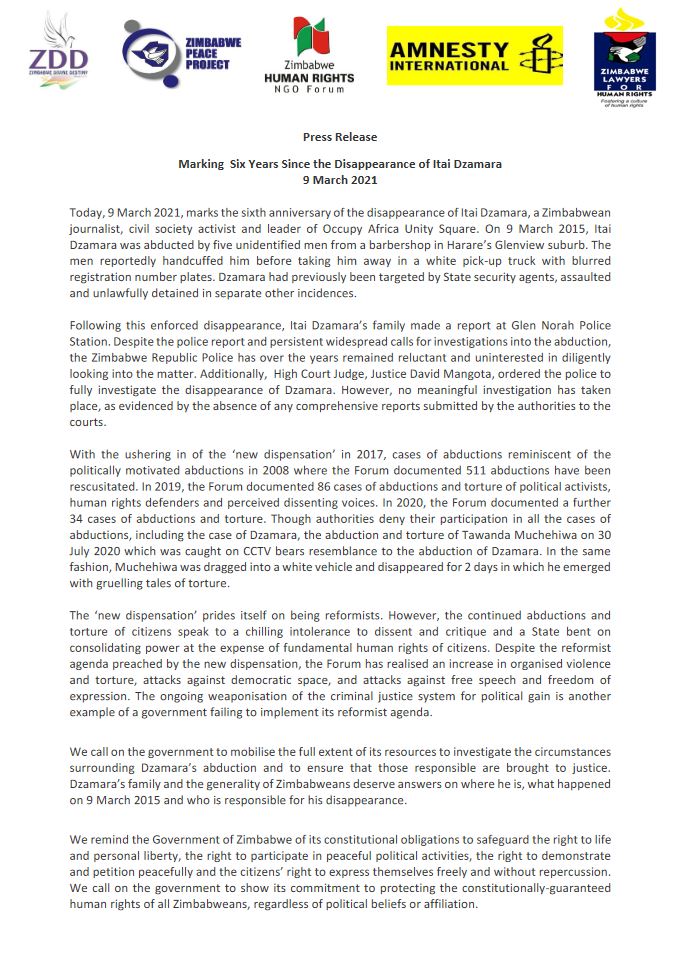 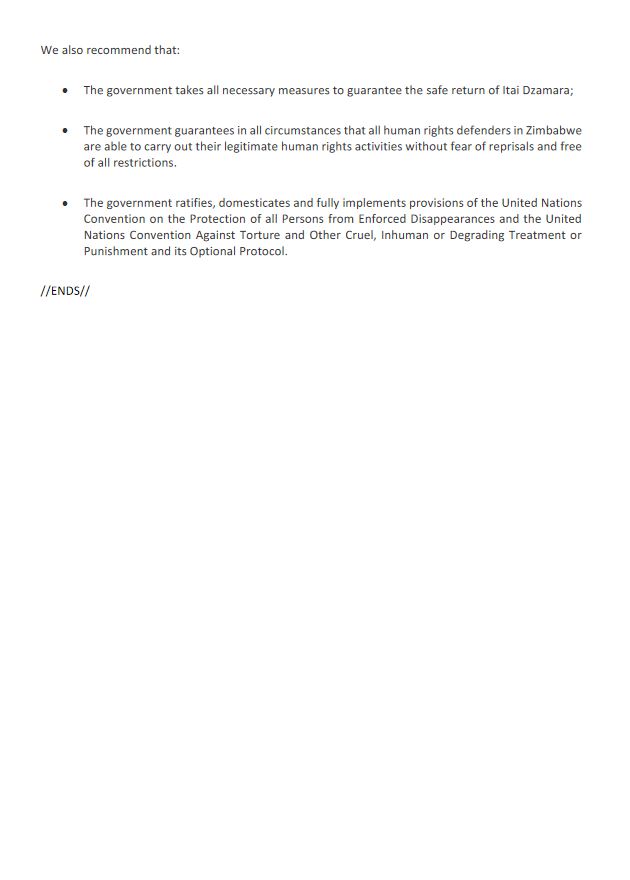