The Meteorological Services Department (MSD) has projected that this Wednesday will be warmer while a few rain-showers are still expected.

In its update on Tuesday, MSD said the cool conditions that are currently being experienced countrywide have resulted in a stable atmosphere with a light drizzle over Masvingo, Southern areas of Midlands, Manicaland, and Mashonaland East provinces and light rain in Harare Metropolitan, all Mashonaland, Matebeleland North and South, Bulawayo metropolitan and Northern areas of Midlands provinces.

All rainfall amounts recorded Tuesday morning were below 10mm.

MSD projected that Wednesday should be warm with mostly sunny conditions over much of the country due to the influence of a low-pressure system in the Mozambique channels. However, brief cloudy conditions with light rain are expected in places especially over Manicaland and all Mashonaland Provinces. 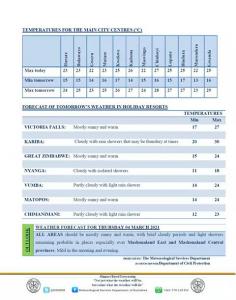 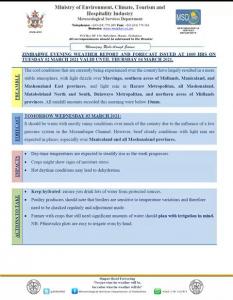